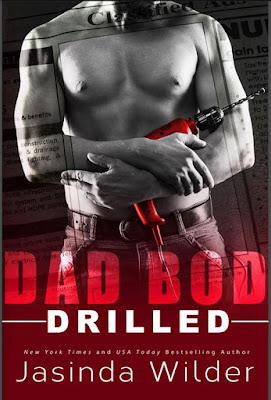 So this book left me with an emotional high.

A very good one.

These two were fascinating to read.

Franco, the craftsman who makes beautiful art with those hands as well as other things.

Audra, the fitness queen in the group who loves her friends hard & finds that loving outside of her friends can be a challenge when you fight it within yourself to allow it.

I liked how Author Jasinda Wilder gave us these flawed characters and showed us their journey in finding how to deal with fixing themselves with self discovery as well as finding their equal within each other!

Loving this series & can't wait to see what happens next with the Bod Contracting men! 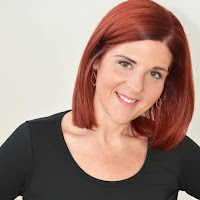 Synopsis:
A brand new sizzling standalone contemporary romance by New York Times, Wall Street Journal, and USA Today bestselling author Katy Evans.
It was supposed to just be a quick trip to Manhattan.
My best friend was heartbroken. She needed support, and I needed inspiration.
I hoped to love the city. Bustling. Crazy. Inspiring New York.
But I ended up at the airport, heading home in the same condition that I arrived.
In a rut.
Add to all that, missing my flight and losing my laptop—the laptop, where the Best Love Story Ever sat on my hard drive.
Enter Noah Steele. Eerily familiar. Movie star. Heartthrob. Sultry romeo with bedroom eyes.
(But we're not going there.)
He missed his flight too.
Noah is so smoldering, lip-bitingly hot, he's not taken seriously as an actor, and is struggling to launch his career in New York.
He's only ever had superficial girlfriends, so he's having trouble showing true passion in his acting—the same challenge I’m having with this book.
When we met, we didn't know that our connection would bring us the change we’d been craving.
That we’d be the very thing the other needed and didn't know.
Each other's muse.
*This book is a complete standalone and no previous reading is necessary to enjoy.

You know when you read a book and swear on everything Holy the author was in your brain?
Author Katy Evans is the one!

Especially with this book.

Becka is me! She is really all of us in some way. She seriously says and does everything I do. Sooo relatable to her. I instantly connected with her the moment I read the first page. Such a lovable, memorable character.

And Noah is my soulmate I’ve been looking for.
He makes believing that love can happen in the most outrageous ways.

Sexy, funny, and full of life, his encounter with meeting Becka in an unusual way was the cherry on top of falling hard for him.

Especially that their meeting was in NYC which I live in and totally was able to visualize every moment Becka & Noah had getting to know each other. 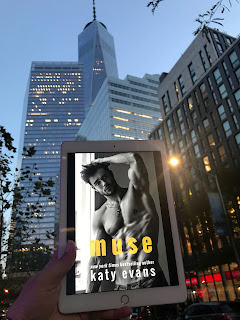 This book has it all & it is a Top 2018 Must Read & my newest favorite from Author Katy Evans.

Go #oneclick & find out why you will want to have the MUSE all to yourself.

About the Author:
Katy Evans is a New York Times, USA Today, and Wall Street Journal bestselling author. Her debut REAL shot to the top of the bestselling lists in 2013 and since then 9 of her titles have been New York Times bestsellers. Her books have been translated into nearly a dozen languages across the world.

USA Today bestselling author of the King Series, T.M. Frazier, brings you an all new trilogy with an anti-hero you’re going to love to hate and a ballsy heroine with tricks up her sleeve.

PERVERSION, book one in the all-new Perversion Trilogy is coming September 25th and we have the first sneak peek for you! 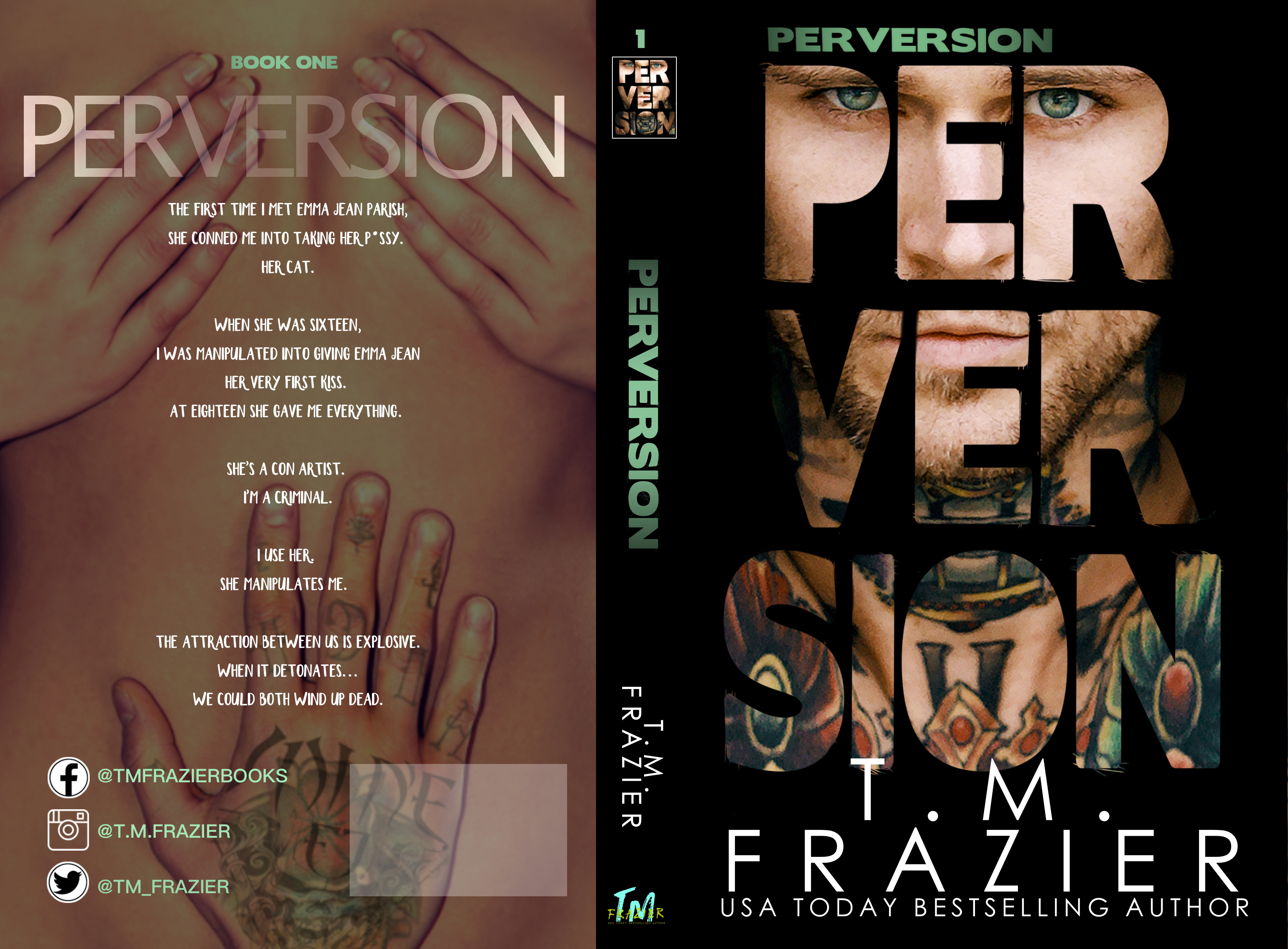 Synopsis
Love is supposed to be magical.
Ours is suicidal.
The first time I met Emma Jean Parish,
she conned me into taking her p*ssy.
Her cat.
When she was sixteen,
she manipulated me into giving her
her very first kiss.
At eighteen she gave me everything.
She's a con artist.
I'm a criminal.
I use her.
She manipulates me.
The attraction between us is explosive.
When it detonates
we could both wind up dead. 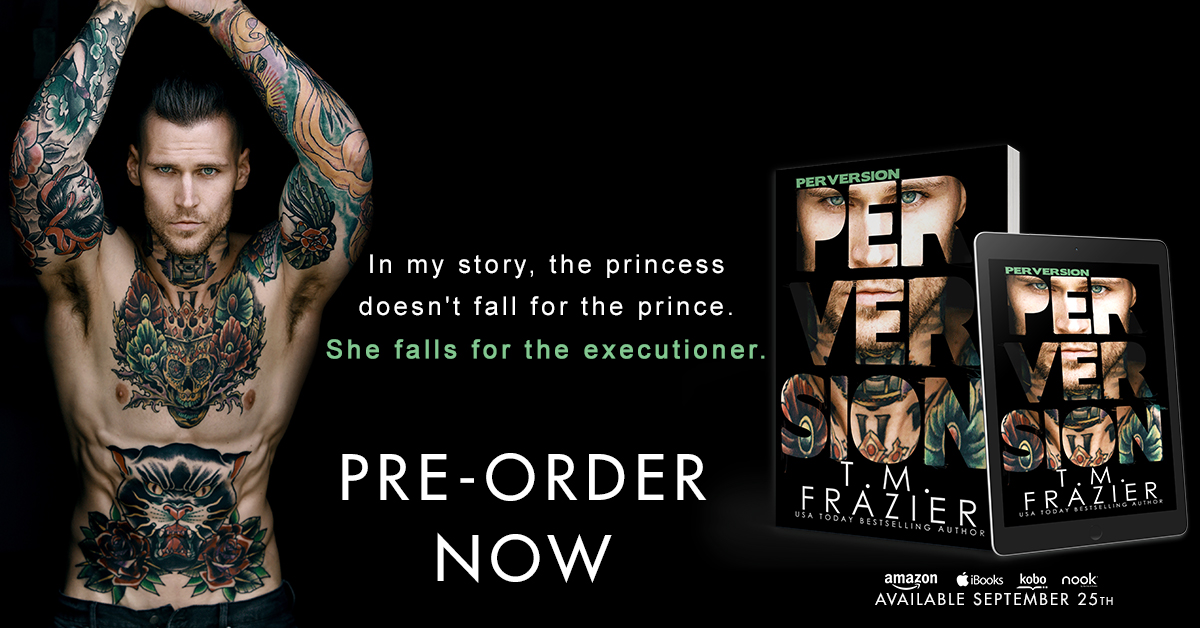 T.M. (Tracey Marie) Frazier never dreamed that a single person would ever read a word she wrote when she published her first book. Now, she is a five-time USA Today bestselling author and her books have been translated into numerous languages and published all around the world. T.M. enjoys writing what she calls sexy‘wrongside of the tracks romance’ with morally corrupt anti-heroes and ballsy heroines. Her books have been described as raw, dark and gritty. Basically, what that means, is while some authors are great at describing a flower as it blooms, T.M. is better at describing it in the final stages of decay. She loves meeting her readers, but if you see her at an event please don’t pinch her because she's not ready to wake up from this amazing dream.

Synopsis
The New York Times bestselling author of Pucked and The Good Luck Charm delivers a Hollywood happily-ever-after where a famous heartthrob falls for his ultimate fangirl in this sexy standalone romantic comedy.
Talk about an embarrassing introduction. On her first day of law school, Kailyn ran - quite literally - into the actor she crushed on as a teenager, ending with him sprawled on top of her. Mortified to discover the Daxton Hughes was also a student in her class, her embarrassment over their meet-cute quickly turned into a friendship she never expected. Of course, she never saw his betrayal coming either...
Now, eight years later, Dax is in her office asking for legal advice. Despite her anger, Kailyn can't help feeling sorry for the devastated man who just became sole guardian to his thirteen-year-old sister. But when her boss gets wind of Kailyn's new celebrity client, there's even more at stake than Dax's custody issues: if she gets Dax to work at their firm, she'll be promoted to partner.
The more time Kailyn spends with Dax and his sister, the more she starts to feel like a family, and the more she realizes the chemistry they had all those years ago is as fresh as ever. But will they be able to forgive the mistakes of the past, or will one betrayal lead to another?

It all started with a mysterious blue note sewn into a wedding dress. Something blue. I’d gone to sell my own unworn bridal gown at a vintage clothing store. That’s when I found another bride’s “something old.” Stitched into the lining of a fabulously feathered design was the loveliest message I’d ever read: Thank you for making all of my dreams come true. The name embossed on the blue stationery: Reed Eastwood, obviously the most romantic man who ever lived. I also discovered he’s the most gorgeous. If only my true-love fantasies had stopped there. Because I’ve since found out something else about Mr. Starry-Eyed. He’s arrogant, cynical, and demanding. I should know. Thanks to a twist of fate, he’s my new boss. But that’s not going to stop me from discovering the story behind his last love letter. A love letter that did not result in a happily ever after. But that story is nothing compared to the one unfolding between us. It’s getting hotter, sweeter, and more surprising than anything I could have imagined. Something new. But I have no idea how this one is going to end . . . 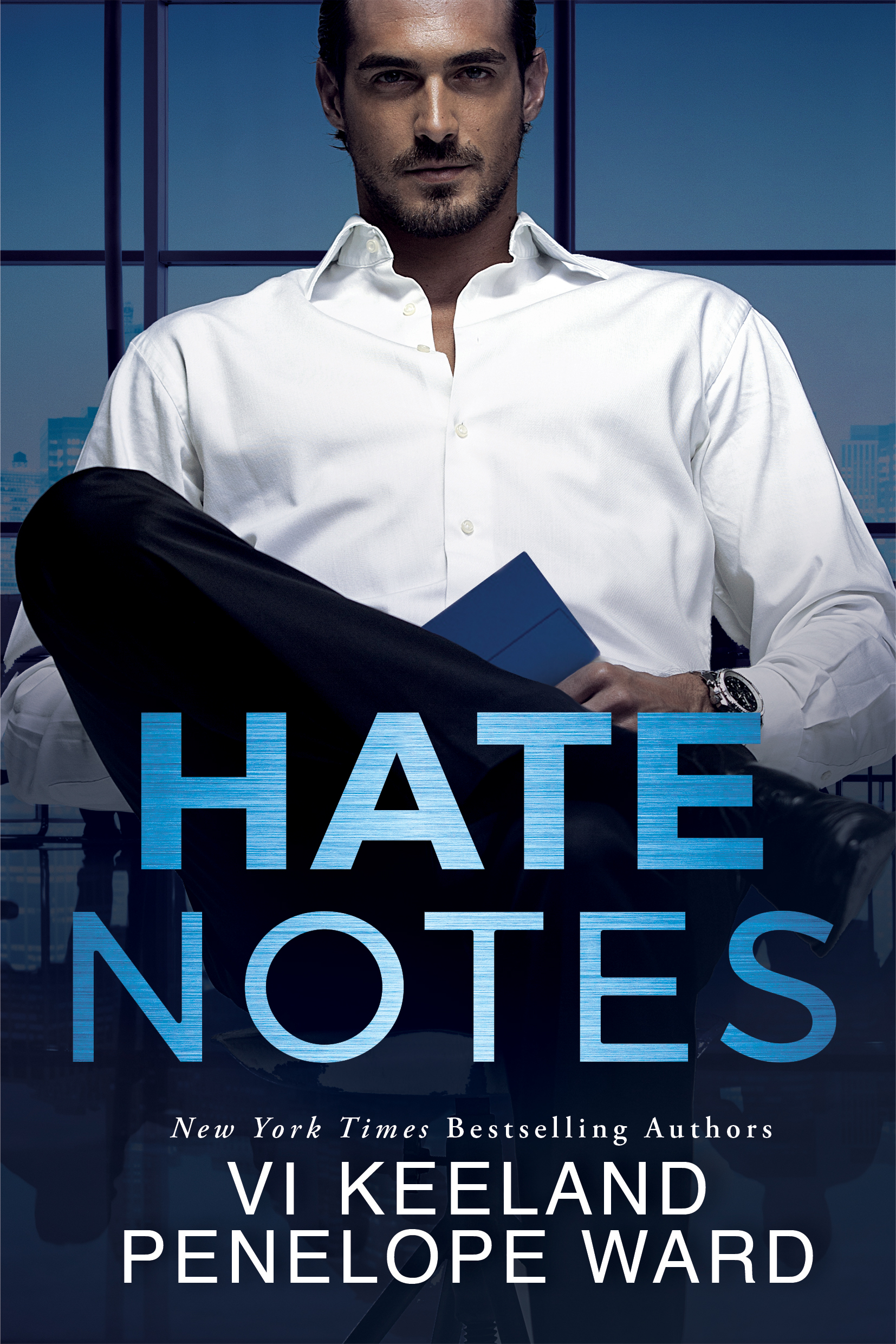 Add to Goodreads ➜ http://smarturl.it/xys920
Amazon print (Currently on sale for $9.99!) ➜ http://smarturl.it/x5h99h
*Please Note: Because Hate Notes is published by Montlake Romance, a division of Amazon, the book will only be available in ebook format on Amazon.
A pre-order will become available in October.
Sign up for Penelope & Vi’s mailing list now and be the first one notified when it goes live! ➜ https://www.subscribepage.com/Vi&Penelope

Vi Keeland is a #1 New York Times, #1 Wall Street Journal, and USA Today Bestselling author. With millions of books sold, her titles have appeared in over a hundred Bestseller lists and are currently translated in two dozen languages. She resides in New York with her husband and their three children where she is living out her own happily ever after with the boy she met at age six. Sign up for Penelope & Vi’s mailing list now and be the first one notified when it goes live! ➜ https://www.subscribepage.com/Vi&Penelope
Do you like texts better than email? Receive text notices of Vi’s new releases by texting the word BOOKS to 77948 You will ONLY receive a text when a new book goes live - no other messages at all!
Find Vi here: Facebook Fan Group: https://www.facebook.com/groups/ViKeelandFanGroup/ Facebook: https://www.facebook.com/vi.keeland https://www.facebook.com/pages/Author-Vi-Keeland/435952616513958
Website: http://www.vikeeland.com
Twitter: @vikeeland - https://twitter.com/ViKeeland
Instagram: @Vi_Keeland - http://instagram.com/Vi_Keeland/
BookBub: https://www.bookbub.com/authors/vi-keeland
Goodreads: http://www.goodreads.com/author/show/6887119.Vi_Keeland

Other Books From Vi & Penelope:

Dear Bridget, I Want You

Left Behind (A Young Adult Novel)

Worth It All (Complete Fighter Series)

Jaded and Tyed (A novelette)