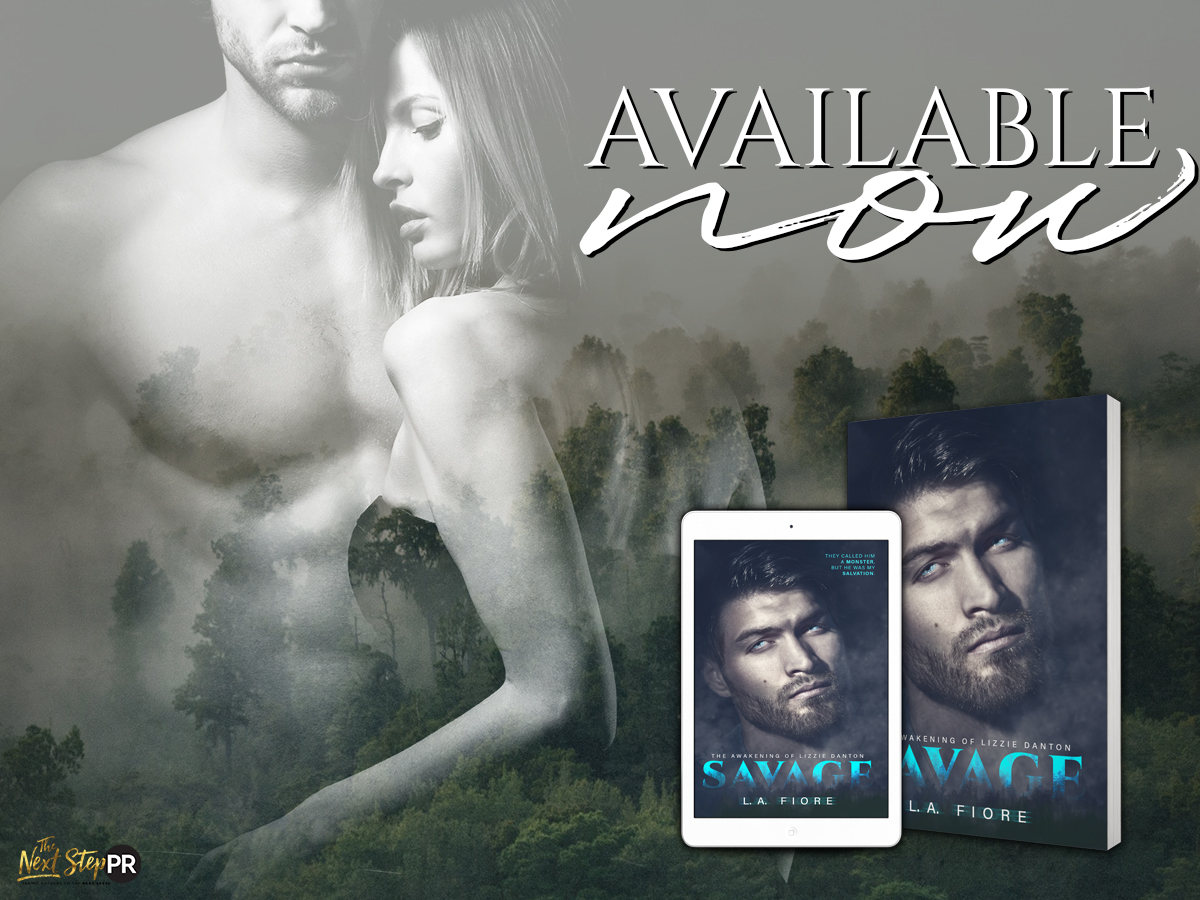 They call him a monster.
Pale blue eyes as cold as ice that see right through you.
He’s hard.
He’s damaged.
He’s dangerous.
He lives in a castle fit for a fairy tale, but he’s no prince.
He’s savage.
He’s brutal.
He’s a killer.
By an act of fate, our worlds collide.
They call him a monster, but he is my salvation.

Get ready to take a journey in a beautifully haunting setting that will leave you wanting to jump on the next plane to Scotland to find your own Savage!

Author L.A. Fiore does it again.

She knows how to take our minds into a world that comes to life off the pages and into our hearts.

This book starts off gutting you and making you feel such pain and loss for the main characters which I loved.

You feel the words that are written of Brochan and Lizzie's story.

I liked how there was enough of love, sex, angst, sadness and happiness in this book.

If you are looking for a good read that will give you all the feels, go grab this book!

L.A. Fiore is the author of several books including Beautifully Damaged, Collecting the Pieces and His Light in the Dark. Her favorite movie is Star Wars, a love her son shares. They hope to build their own Millennium Falcon one day. She would like to meet the Winchester Boys to thank them for enlightening her on the versatility of salt as not just a food enhancer, but as protection from supernatural threats. And she thinks it would be interesting to be a zombie, to get an idea of what life is like as a brain-addicted fiend so she can be their voice to tell their side of the story. She lives in Pennsylvania with her husband and kids, their two spoiled cats and their awesome dog.

We are thrilled to bring you the next standalone novel from #1 New York Times Bestselling Author, Vi Keeland. SEX, NOT LOVE will release on January 15th, 2018

My relationship with Hunter Delucia started backwards. We met at a wedding—him sitting on the groom’s side, me sitting on the bride’s. Stealing glances at each other throughout the night, there was no denying an intense, mutual attraction. I caught the bouquet; he caught the garter. Hunter held me tightly while we danced and suggested we explore the chemistry sparking between us. His blunt, dirty mouth should’ve turned me off. But for some crazy reason, it had the opposite effect on me. We ended up back in my hotel room. The next morning, I headed home to New York leaving him behind in California with the wrong number. I thought about him often, but after my last relationship, I’d sworn off of charming, cocky, gorgeous-as-sin men. A year later, Hunter and I met again at the birth of our friends’ baby. Our attraction hadn't dulled one bit. After a whirlwind trip, he demanded a real phone number this time. So I left him with my mother’s—she could scare away any man with her talks of babies and marriage—and flew back home. I’d thought it was funny, until the following week when he rang the bell at Mom’s house for Sunday night dinner. The crazy, gorgeous man had won over my mother and taken an eight-week assignment in my city. He proposed we spend that time screwing each other out of our systems. Eight weeks of mind-blowing sex with no strings attached? What did I have to lose? Nothing, I thought. It’s just sex, not love. But you know what they say about the best laid plans…

**No Amazon ebook preorder. Will go live on Amazon on release day.

Vi Keeland is a #1 New York Times and #1 Wall Street Journal Bestselling author. With millions of books sold, her titles have appeared in over eighty Bestseller lists and are currently translated in nineteen languages. She lives in New York with her husband and their three children where she is living out her own happily ever after with the boy she met at age six.

COVER REVEAL: Hunt Me Down by A.L. Jackson

A stand-alone novella in A.L. Jackson's brand-new Fight for Me series...

Cover: RBA Designs
Photo: Focus and Blur
I'm so excited to reveal the HUNT ME DOWN cover! HUNT ME DOWN was originally a part of the GLAMOUR Anthology, and now is coming to you as its own novella! I had so much fun writing this little story - it's an uber-sexy introduction into the world of Gingham Lakes, Alabama. So be sure to get this on your TBR - Broderick Wolfe is coming for you December 1, 2017!
Never underestimate a man who knows what he wants . . .
Broderick Wolfe is a man accustomed to getting what he wants. He will hunt it, fight for it, and make it his own.
Lillith Redd is a straight-laced attorney who’s dedicated her life to serving the people of her hometown of Gingham Lakes.
When Wolfe Industries sets its sights on leveling the old part of town and building a high-rise hotel in its place, Lillith steps up to go toe-to-toe to with its owner.
Little do either of them know, they’ve just met their match.
Hunt Me Down is a modern-day reboot of Little Red Riding Hood set in the world of A.L. Jackson’s bestselling FIGHT FOR ME series, originally a part of the Glamour Anthology and previously titled Red Hot Pursuit. This novella is a fun, flirty, uber sexy contemporary romance. The only fantasy happening here is in the bedroom. So hold on—you’re getting ready to sink your teeth into something hot and sweet.
Disclaimer: This book was originally titled Red Hot Pursuit in the Glamour anthology. It has not been changed or added to in any way. This novella does not need to be read before Show Me the Way and does not give away any spoilers for other Fight for Me novels.
Add to Goodreads
Be notified of LIVE RELEASE on Amazon
Signed Paperback PRE-ORDER

A.L. Jackson is the New York Times & USA Today Bestselling author of contemporary romance. She writes emotional, sexy, heart-filled stories about boys who usually like to be a little bit bad.
Her bestselling series include THE REGRET SERIES, CLOSER TO YOU, and BLEEDING STARS novels. Watch for A.L. Jackson’s upcoming novel, FOLLOW ME BACK, the second stand-alone novel in her brand-new FIGHT FOR ME SERIES.
If she’s not writing, you can find her hanging out by the pool with her family, sipping cocktails with her friends, or of course with her nose buried in a book.
Be sure not to miss new releases and sales from A.L. Jackson - Sign up to receive her newsletter http://smarturl.it/NewsFromALJackson or text “aljackson” to 24587 to receive short but sweet updates on all the important news.

From Wall Street Journal bestselling author Ilsa Madden-Mills comes a new standalone romance about a flawed hero and the woman he can’t forget.

Spider, a sexy and forbidden new standalone, is LIVE!

He calls himself Spider.
I just know him as the sinfully gorgeous guy with eyes of fire that fate places next to me on the airplane.
I didn’t who he really was . . . future rock star . . . my stepbrother.
He kissed me because he thought he’d never see me again. He would.
Everyone warned me about him.
They told me he was careless and ruthless and screwed up.
They said he’d leave me with a hole in my heart.
Maybe I should have listened.
Maybe I should have built a fortress to keep him out.
But I crumbled instead.
They say an unbreakable thread connects those who are destined to meet. If that’s true, then the moment he sat next to me, we were bound together forever.
He just had to figure it out before it’s too late… 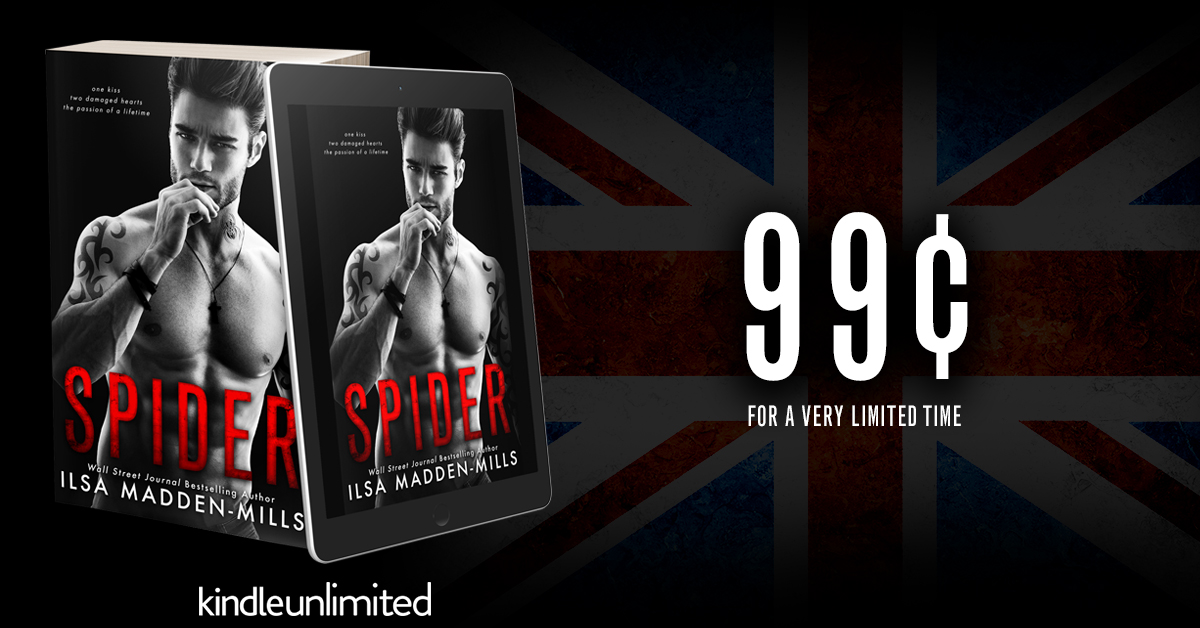 New York Times and USA Today bestselling author Ilsa Madden-Mills writes about strong heroines and sexy alpha males that sometimes you just want to slap. She's addicted to dystopian books and all things fantasy, including unicorns and sword-wielding females. Other fascinations include frothy coffee beverages, dark chocolate, Instagram, Ian Somerhalder (seriously hot), astronomy (she's a Gemini), and tattoos. She has a degree in English and a Master's in Education. When she's not pecking away on her computer, she shops for cool magnets and paints old furniture.