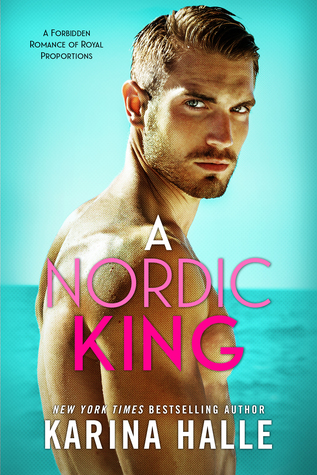 Available on Amazon & Free on KU

When I first applied for the job I thought it would be like all the others: working as a nanny for an aristocratic family.
Then I got the job and found out how wrong I was.

Now I’m the new nanny for two adorable little girls who happen to be princesses.

Their father is the widowed King of Denmark.
And my new home? The royal palace in Copenhagen.
Adjusting to my new life isn't easy but the hardest part hasn’t been the girls who still grieve over the loss of their mother.

It’s their father.
Cold, mysterious and moody, with an icy stare that seems to penetrate your soul, King Aksel may have hired me to take care of his daughters but he wants as little to do with me as possible.

Yet the longer I share these palace walls with this man, the more that I’m drawn to him. His chiseled face and sexual swagger are only part of the package. It’s in the long, intense glances at the dinner table, the way we’ll brush up against each other in the halls, the rare glimpses of the man deep inside, like the sun passing through clouds.
But no matter how I feel about him, we can never be together.

♥️ it!Askel & Aurora was a breath of fresh air to read.Author Karina Halle snarfed 🐽 my bubble on reading about being in royalty 👑. Especially A certain stubborn King named Askel 😉It was a beautifully written captivating, angsty, breathtaking, heartfelt story.I laughed, I cried & I loved it all. Well developed story line, memorable characters & romance story that made my heart pop into a million pieces.I can’t wait for everyone to dive into and fall in love with King Askel like I did!

She changed everything.
And demanded it all.

Kaznachei's Pain by V.F. Mason is releasing on October 4th!

ADD TO YOUR TBR: http://bit.ly/Kaznachei

Kaznachei A long time ago, life was nothing but never-ending suffering. The brotherhood welcomed me with open arms, giving me a chance even though I hated everything about it. For years I lived on the edge of desperation, seeking solace in things that never gave me peace. Until she showed up, changing everything…and demanding it all. A beautiful yet stubborn FBI agent who made me crazy with every breath she took. Unfortunately, her presence awakened the evils of my past that would not rest until they destroyed what I held dear to my heart.

About the Author:
V.F.Mason always loved reading books and had quite a few fights with her momma over the genre she liked (romance, duh!) She studied filmmaking and thought that would feed her desire for stories, but that didn’t happen. Finally, when she was tired of all those voices in her head, she sat down and wrote a book. It was a huge decision to make and she thanks her friends and family for supporting her in it. When she is not writing, she can be found with her friends doing all sorts of crazy things or reading recent romance books that were written by her favorite authors.

Princess Lenora Celeste Beatrice Arabella Pembrook had an unusual childhood. She was raised to be a Queen—the first Queen of Wessco. It’s a big deal. When she’s crowned at just nineteen, the beautiful young monarch is prepared to rule. She’s charming, clever, confident and cunning. What she isn’t…is married. It’s her advising council’s first priority. It’s what Parliament is demanding, and what her people want. Lenora has no desire to tie herself to a man—particularly one who only wants her for her crown. But compromises must be made and royals must do their duty. Even Queens. Especially them.

** Years ago, Edward Langdon Richard Dorian Rourke, walked away from his title and country. Now he’s an adventurer—climbing mountains, exploring jungles, going wherever he wants, when he wants—until family devotion brings him home. And a sacred promise keeps him there. To Edward, the haughty, guarded little Queen is intriguing, infuriating…and utterly captivating. Wanting her just might drive him mad—or become his greatest adventure. **

Within the cold, stone walls of the royal palace—mistrust threatens, wills clash, and an undeniable, passionate love will change the future of the monarchy forever. Every dynasty has a beginning. Every legend starts with a story. This is theirs.

ROYALLY YOURS will be available on October 30th

Get an alert when the book is available on Amazon

Emma Chase is the New York Times and USA Today bestselling author of the hot and hilarious Tangled series and The Legal Briefs series. Emma lives in New Jersey with her husband, two children and two naughty (but really cute) dogs. She has a long-standing love/hate relationship with caffeine.