By Ilsa Madden-Mills and Tia Louise

The first rule of office romance is don’t do it—especially if your dream is to hold the anchor spot on the nightly news and your boss is trying to get you fired.
But one look at Cade Hill, the sexy new sports director, and uptight reporter Rebecca Fieldstone is daydreaming about other things.
Sex in his office…
Sex in the on-set kitchen…
Sex in the supply closet…
She can’t stop thinking about the former NFL quarterback and how perfect he’d look between her sheets—except he’s an arrogant jerk with a huge… ego.
He’s the last guy she’d ever have a one-night stand with.
Cade Hill draws a thick professional line on office romance—until it comes to the hyper-focused Rebecca. He wants her, and he gets his wish when a chance encounter has them having the hottest sex of their lives.
It’s just a hook-up, she says.
When can we do it again? he says.
With Rebecca determined to keep Cade in the friend zone, it’s going to be an uphill battle for Cade to convince her he’s the last guy she’ll ever want.
THE LAST GUY is the first white-hot CONTEMPORARY ROMANTIC COMEDY from Wall Street Journal bestselling author Ilsa Madden-Mills and Tia Louise. It features Fireball-fueled hookups, Doritos Locos Tacos, attack monkeys, toddlers in tiaras, and one fabulous drag queen. Prepare for frantic clicking (or page flipping!) and smoking-hot sexytimes all the way to the out-of-this-world happily-ever-after.

★ Get an email alert when THE LAST GUY goes LIVE on Amazon: http://smarturl.it/TLGSignup

ADD it on Goodreads: https://goo.gl/2dhXVt

LISTEN to the playlist on Spotify: https://goo.gl/AXnGKe

Wall Street Journal bestselling author Ilsa Madden-Mills and the “Queen of Hot Romance” Tia Louise are not a secret duo, but simply themselves. Great friends, former English teachers, and southern gals in real life, they’ve teamed up to bring you laugh-out-loud naughty romances with strong leading ladies and sexy alpha males who know how to please their women… and who sometimes you just want to slap.

My best friend is married.

Everyone I know is married. It doesn’t bother me.

I like my life the way it is. Since I’m single though, when my best friend and her husband finally decide to go on their dream honeymoon, she asks me to watch their three-year-old son.

Of course I say yes.

What my best friend neglects to tell me is that I won’t be babysitting alone.

Feeling Max might be too much for me to handle, her husband asks his only single friend to help.

Nick Carrington and I have met a couple of dozen times. I’ve never really given him a second thought—other than to say he’s kind of a jerk. Out loud. So he can hear. Sure, he’s tall, dark, and handsome. And yes, he has the best ass I’ve ever seen, and I mean ever seen quite literally. You see he mooned me at last year’s Fourth of July barbecue because, like I said, he’s a jerk.

He always has to be the life of the party.

I’d even go as far as to say he’s a manwhore.

Yet somehow before I know it, this manwhore and I are co-parenting. Living under the same roof. Eating meals together and yes, talking.

Even though I knew every minute would be hell, I had to say yes.

But after two weeks what I didn’t expect is that I’d been wrong about him.

That under his smart-ass exterior, he’s quite charming.

That his arrogance is actually confidence.

And that the sight of his naked body would do really bad things to me.

And I want more of him.

The question is—does he want more of me?

Yep fell in love with the hot, funny, dominating and swoon worthy Sexy Jerk that is Nick Carrington!

This book has it all to keep you entertained this summer season.

It is a fun, sexy, read that will have you needing to jump in the pool to cool off.

Author Kim Karr does it again with giving us characters we fall in love with and want to be.

Kim Karr is a New York Times, USA Today and Wall Street Journal Bestselling author.
She grew up in Rochester, NY and now lives in Florida with her husband and four kids. She's always had a love for reading books and writing. Being an English major in college, she wanted to teach at the college level but that was not to be. She went on to receive an MBA and became a project manager until quitting to raise her family. Kim currently works part-time with her husband and recently decided to embrace one of her biggest passions--writing.

Kim wears a lot of hats! Writer, book-lover, wife, soccer-mom, taxi driver, and the all around go-to person of her family. However, she always finds time to read. One of her favorite family outings was taking her kids when they were little to the bookstore or the library. Today, Kim's oldest child is seventeen and no longer goes with her on these, now rare and infrequent, outings. She finds that she doesn't need to go on them anymore because she has the greatest device ever invented--a Kindle.

Kim likes to believe in soul mates, kindred spirits, true friends, and Happily-Ever-Afters. She loves to drink champagne, listen to music, and hopes to always stay young at heart.

Posted by CherryRed's Reads at May 25, 2017 No comments:
Email ThisBlogThis!Share to TwitterShare to FacebookShare to Pinterest
Labels: Kim Karr, New Releases, Reviews, The Next Step PR 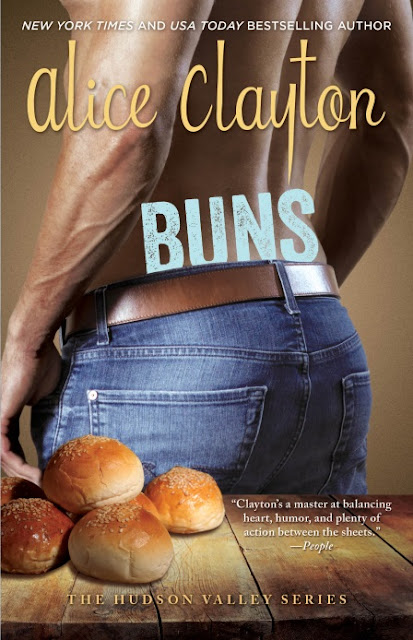 Clara Morgan is living the dream, if you can call rebranding hotels that are desperate for a new life and running any kind of marathon a dream. Which she does. But the career she loves and the endurance races that keep her adrenaline pumping have kept her too busy to put down any roots. Growing up in foster care, she’s never been able to establish traditions of her own, which may be why she’s fascinated by the rituals that generations-old family resorts are known for. She’s especially interested in the Bryant Mountain House, and not just for their secret recipe for the yummy, gooey, can’t-get-enough-of Hot Cross Buns….

Archie Bryant, the man with the Buns, is fifth generation and one-day-owner of the charming yet run-down Bryant Mountain House in Bailey Falls, New York. He’s determined to save his family’s legacy from the wrecking ball the old-fashioned way—by gritting his teeth and doing what needs to be done. There’s no way Archie will be influenced by the new hotel branding expert his father brought in to turn one hundred and fifty years of tradition on its head just to attract a faster, younger, slicker crowd. But when some of Clara’s ideas start bringing in new, paying customers, Archie can’t deny that she may have just given him a shot at keeping his resort open.

Okay first off, it has cherry references in it!

No but seriously I loved this pair of characters!

The sexual tension was off the charts.

I was enraptured by the head strong, stubborn and devoted Clara Morgan & Archie Bryant when it came to their jobs & their love life.

Their back and forth with each other of deny their feelings is what makes this story such a great read.

This story of course has tons of humor, sexy times, angst, nice surprises that yes, YOU will be in shock when you read this book on what or who may appear!

After reading, I want to take a trip to upstate New York & stay at a B&B hotel overlooking the beautiful landscapes and fall in love while rereading this book.

Go One click this & be ready to have your fingers dripping in sweet sticky deliciousness in the Hudson Valley Series!

Posted by CherryRed's Reads at May 24, 2017 No comments:
Email ThisBlogThis!Share to TwitterShare to FacebookShare to Pinterest
Labels: Alice Clayton, Gallery Books, NetGalley, Reviews 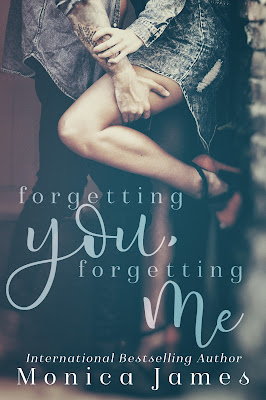 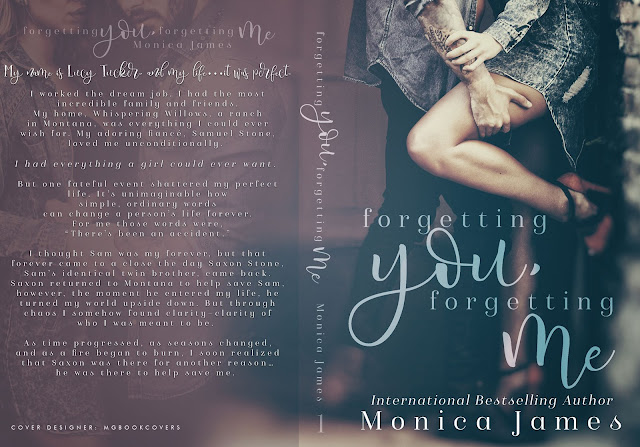 My name is Lucy Tucker, and my life…it was perfect.

I worked the dream job. I had the most incredible family and friends. My home, Whispering Willows, a ranch in Montana, was everything I could ever wish for. My adoring fiancé, Samuel Stone, loved me unconditionally.

I had everything a girl could ever want.

But one fateful event shattered my perfect life. It’s unimaginable how simple, ordinary words can change a person’s life forever. For me those words were, “There’s been an accident.”

I thought Sam was my forever, but that forever came to a close the day Saxon Stone, Sam’s identical twin brother, came back. Saxon returned to Montana to help save Sam, however, the moment he entered my life, he turned my world upside down. But through chaos I somehow found clarity—clarity of who I was meant to be.

As time progressed, as seasons changed, and as a fire began to burn, I soon realized that Saxon was there for another reason…he was there to help save me. 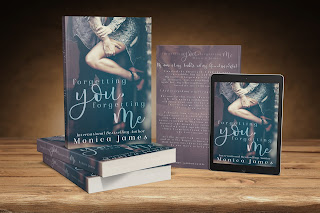 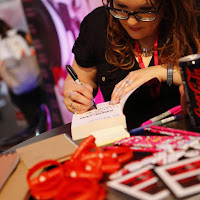 Monica James spent her youth devouring the works of Anne Rice, William Shakespeare, and Emily Dickinson.
When she is not writing, Monica is busy running her own business, but she always finds a balance between the two. She enjoys writing honest, heartfelt, and turbulent stories, hoping to leave an imprint on her readers. She draws her inspiration from life.
She is a bestselling author in the U.S., Australia, Canada, France, Germany, Israel, and the U.K.
Monica James resides in Melbourne, Australia, with her wonderful family, and menagerie of animals. She is slightly obsessed with cats, chucks, and lip gloss, and secretly wishes she was a ninja on the weekends.
Author Links
Facebook: https://www.facebook.com/authormonicajames
Twitter: https://twitter.com/monicajames81
Goodreads: https://www.goodreads.com/MonicaJames
Instagram: @MonicaJames
Website: http://monicajamesbooks.blogspot.com.au/
Pinterest: http://www.pinterest.com/monicajames81/