“Trust no one. Everyone lies. You can only save yourself.” It was supposed to be a Friday night like any other for Lana and her best friends. Three girls out to cause a little trouble. Break a few hearts. And try not to get caught. Except on this night, Lana Peri is the sole witness to a horrific crime, and she can’t say a word. Not if she wants to protect her friends. No one will believe her word over his, so he gets away with it. And she’s forced to pay for her silence. Instead of serving time in juvie, Lana is sentenced to a boarding school for privileged teens. Removed from everyone she knows and cares about, she’s abandoned at Blackwood School in Vermont, where everything is an illusion, including the lives of those who attend the elite institution. Lana isn’t wealthy or privileged. The only thing she has in common with the sons and daughters of celebrities and politicians is that she’s a delinquent, just like them. And they’ve all been forced to grow up much too fast. Just when Lana begins to feel accepted, mysterious notes start showing up in her belongings and ominous threats are painted on her wall.  Only someone she knows could have done it. Someone she thought was a friend. As the pieces fall into place, secrets begin to emerge, leaving Lana with too many questions and not enough people to trust. The Cursed Series is a thrilling and tangled mystery that explores the sacrifice of love and the secrets kept to protect friends. How do you know who to trust when no one is telling the truth? 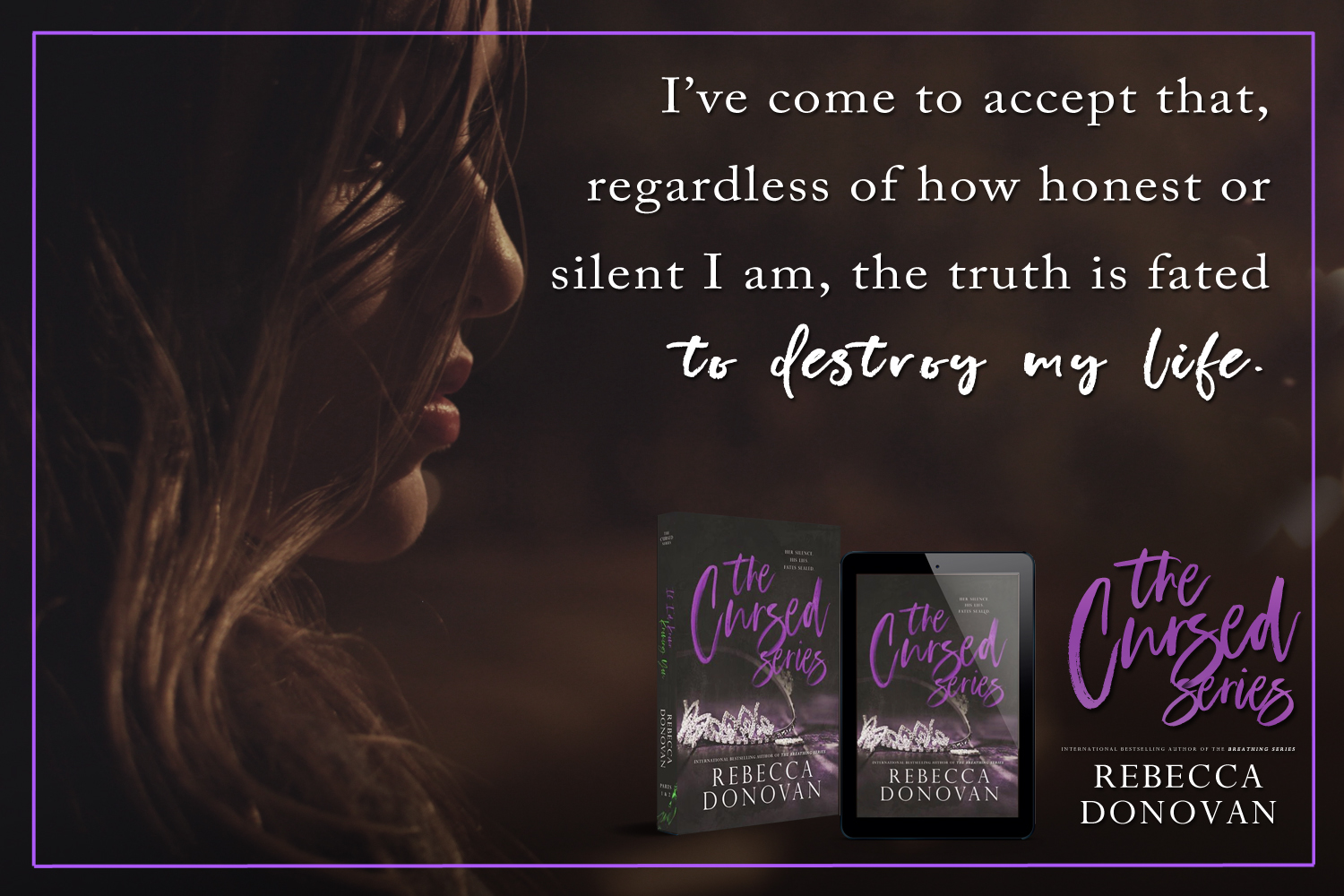 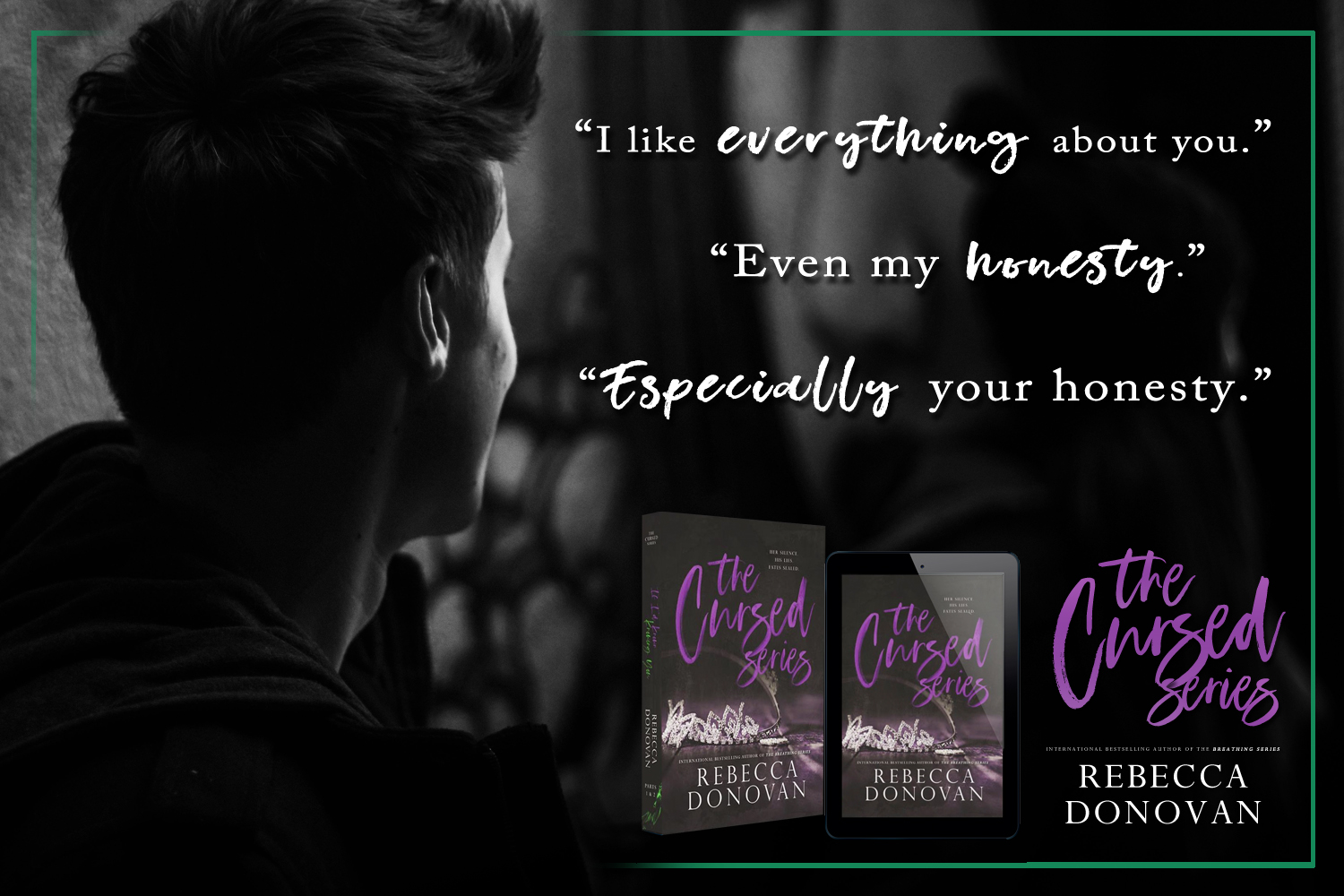 A beautifully written suspenseful, mysterious, romantic book that will leave you emotionally breathless.

From the first page to the last, I was hooked!

Author Rebecca Donovan brings this new series to life off the pages.

From the blurb I was intrigued on where this book would take me and it did not disappoint.

Such a good mix of mystery and reveals that will leave you intrigued.

“This is Screaming Point.”
“That’s what it’s called?”
“It is now. As of today. Because it’s what we need it to be.” She takes my hand. “Ready?”
I look out at the dwindling light dancing on the dark surface like the lake is capturing every last bit of the sun before it disappears. I close my eyes and find that place inside that is always angry. That hates my curse. That needs Allie to live. And Vic to burn. That wants to hurt every man who has ever broken my mother’s heart. Or touched what wasn’t theirs. And every person who has ever lied when they claimed to love. I don’t have to search for long, because it’s always there, waiting to explode.
I open my eyes to look into Ashton’s sapphire blue ones, and nod.
We face the water and inhale deeply, giving our anger, frustration and sadness a breath of life before we unleash it onto the world in the most powerful scream that’s ever been launched from this cliff. And it’s freeing. More than I ever thought possible. I allow my heartache to take flight, releasing it into the setting sun to be dragged down beneath the horizon.
And what’s left when there aren’t any more screams to give is a radiant smile. Ashton and I face each other, our hands still clasped, and we start laughing. It’s a true, bonding laughter because we just shared something sacred. If anyone were to witness it, they would think we’re insane. And maybe it’s that crazy within each of us that makes the laughter louder and deeper until I have to wipe away the tears creeping out the corners of my eyes.
“Thank you, Ashton,” I tell her as we start back across the field. “My soul needed that.”

Enter to win the Giveaway HERE! 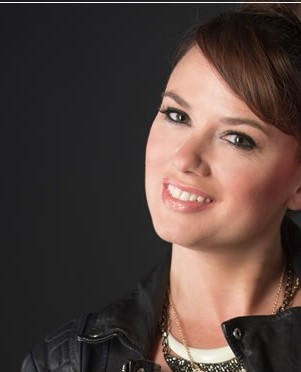 Rebecca Donovan, the USA Today and Wall Street Journal bestselling YA author of The Breathing Series and What If, lives in a small town in Massachusetts with her son. Influenced and obsessed with music, Rebecca can often be found jumping around at concerts, or on a plane to go see one. She’s determined to experience (not just live) life. And then write about it.

Posted by CherryRed's Reads at March 28, 2019 No comments:
Email ThisBlogThis!Share to TwitterShare to FacebookShare to Pinterest
Labels: Rebecca Donovan, Reviews, The Cursed Series

From the moment Halo set foot in Viper’s lair, the match was lit, threatening to consume the two men with the heat of their desire. But when their casual flings begins to morph into more, will it leave the entire band in flames?

After all, it may have been Halo who fell from grace, but it’s only a matter of time before Viper falls for an angel.

VIPER is the second book of the Fallen Angel Series and should be read following HALO. Halo and Viper’s story concludes in book three, ANGEL. 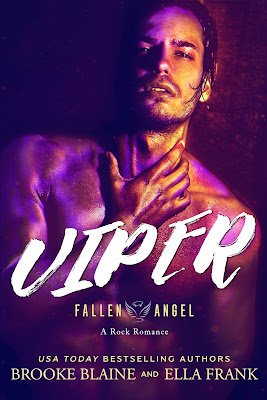 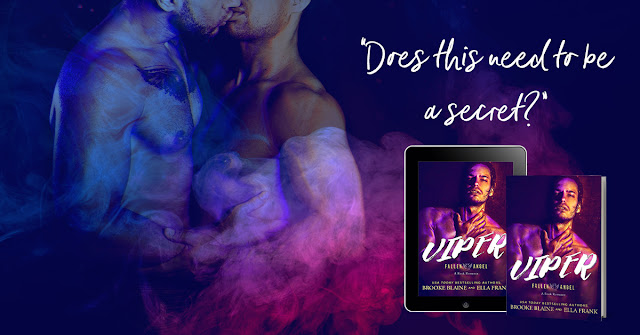 This book is everything.
I seriously love, love, loved it soo much I read it 3x in 48 hrs because I did not want it end.

Viper is a sexy, stubborn man and sooo in denial when it comes to his feelings for Halo.

This book will take you on one heck of ride on how Viper and Halo's connection begins to evolve into something neither one of them imagined.

There are tons of angsty, sexy and straight up swoony moments in this book that are very memorable and also will leave you speechless.

Yes to the tons of sexy times that had me needing a cold shower!

Just go get this book and find out if Viper is more than his cocky rockstar persona  he pretends to be towards others and how he really feels about Halo.

Oh and Halo will blow your mind in this book.

I can’t wait for the conclusion to Halo & Viper's story! 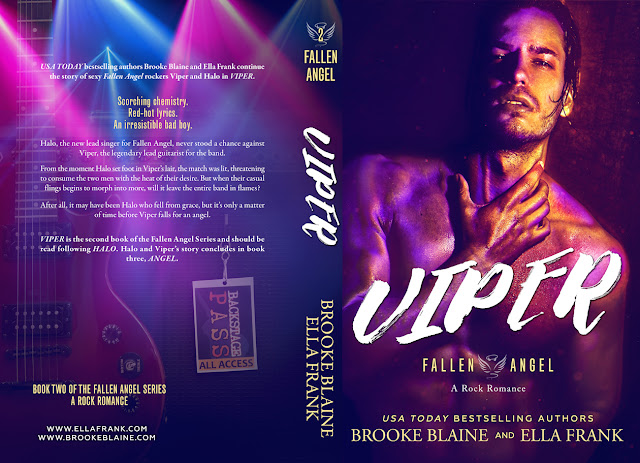 Ella Frank is the USA Today Bestselling author of the Temptation series, including Try, Take, and Trust and is the co-author of the fan-favorite contemporary romance, Sex Addict. Her Exquisite series has been praised as “scorching hot!” and “enticingly sexy!” Some of her favorite authors include Tiffany Reisz, Kresley Cole, Riley Hart, J.R. Ward, Erika Wilde, Gena Showalter, and Carly Phillips.