SEARCHING FOR DISASTER by Jennifer Probst 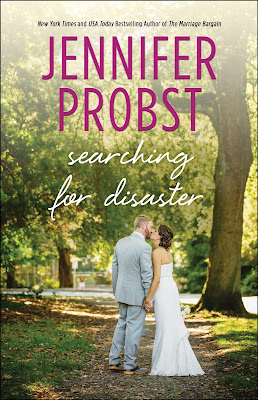 The next highly anticipated novella in the Searching For series, a romantic spin-off of the Marriage to a Billionaire series from New York Times bestselling sensation Jennifer Probst.

When Isabella MacKenzie tries to move on from her disastrous past, Officer William Devine is determined to show her that love is the only way to heal. This sexy novella, the final installment in Jennifer Probst’s heartwarming Searching For series, follows the high-powered women of the popular matchmaking agency Kinnections, located in the small, picturesque town of Verily, NY.
🍒 🍒 🍒 🍒 🍒 🍒 🍒 🍒 🍒 🍒 🍒 🍒 🍒 🍒 🍒 🍒 🍒 🍒 🍒🍒 🍒🍒

The final installment is here.
And yes I savored this novella because this series is one I will go back and reread again and again by Jennifer Probst.

This one is the story of Isabella (aka: Izzy) and William (aka: Liam).
We had a taste of Izzy in the series because of her twin sister Genevieve and I was looking forward to seeing if Izzy would get her own Happy Ever After and she did.

And I swooned, hard for her and William.  William and Izzy story started a couple of years back when they met and had an attraction that I was happy to see after all these years apart it did not fizzle.

In fact, it was down right hot, sexy, humorous and sooo darn cute!

And I loved all the sport references, the puppy love, the connections with everyone in the series.  This story gave it all and more.

This book was a very satisfying wrap up to a series I highly recommend everyone to read. 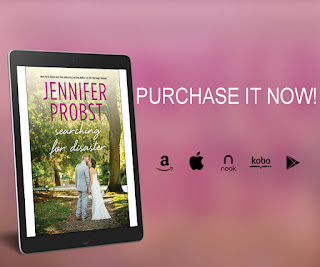 Jennifer Probst wrote her first book at twelve years old. She bound it in a folder, read it to her classmates, and hasn’t stopped writing since. She took a short hiatus to get married, get pregnant, buy a house, get pregnant again, pursue a master’s in English Literature, and rescue two shelter dogs. Now she is writing again.She makes her home in Upstate New York with the whole crew. Her sons keep her active, stressed, joyous, and sad her house will never be truly clean.She is the New York Times, USA Today, and Wall Street Journal bestselling author of sexy and erotic contemporary romance. She was thrilled her book, The Marriage Bargain, was ranked #6 on Amazon's Best Books for 2012. She loves hearing from readers. Visit her website for updates on new releases and her street team at www.jenniferprobst.com.
Website: www.jenniferprobst.comFacebook Fan Page: https://www.facebook.com/jenniferprobst.authorpage Twitter: https://twitter.com/jenniferprobst Goodreads: https://www.goodreads.com/author/show/2965489.Jennifer_Probst
Posted by CherryRed's Reads at October 21, 2016 No comments:
Email ThisBlogThis!Share to TwitterShare to FacebookShare to Pinterest
Labels: Jennifer Probst, Reviews

Marry Me Mad is one swoon worthy read! AND IT'S LIVE!

Blurb:
Did you fall in love with The English Brothers? Were you hot for the Winslows? Katy Regnery's New York Times bestselling Blueberry Lane series continues with The Rousseau siblings in 2016!
For as long as Madeleine “Mad” Rousseau can remember, she’s been the “sweet” twin to her sister Jax’s “sassy.” But after an especially painful break-up, Mad decides she’s had enough of being sweet. Children’s librarian during the day, she begins visiting Philly’s seedier nightspots on a quest for adventure. When Cortlandt “Cort” Ambler, the ex-boyfriend of Mad’s sister, Jax, saves her from disaster on one such evening, an unlikely friendship is born between the rebellious librarian and the moonlighting pianist…and two broken hearts begin a journey toward being whole again. Get to know the families of Blueberry Lane! *All books in The Blueberry Lane Series can be enjoyed as standalone novels.*

Make sure you don't miss the start of the Rousseau series! Jonquils for Jax is now available!

New York Times and USA Today bestselling author Katy Regnery started her writing career by enrolling in a short story class in January 2012. One year later, she signed her first contract and Katy’s first novel was published in September 2013. Twenty-five books later, Katy claims authorship of the multi-titled, New York Times and USA Today Blueberry Lane Series, which follows the English, Winslow, Rousseau, Story, and Ambler families of Philadelphia; the six-book, bestselling ~a modern fairytale~ series; and several other standalone novels and novellas. Katy’s first modern fairytale romance, The Vixen and the Vet, was nominated for a RITA® in 2015 and won the 2015 Kindle Book Award for romance. Katy’s boxed set, The English Brothers Boxed Set, Books #1–4, hit the USA Today bestseller list in 2015, and her Christmas story, Marrying Mr. English, appeared on the list a week later. In May 2016, Katy’s Blueberry Lane collection, The Winslow Brothers Boxed Set, Books #1-4, became a New York Times E-book bestseller. In 2016, Katy signed a print-only agreement with Spencerhill Press. As a result, her Blueberry Lane paperback books will now be distributed to brick and mortar bookstores all over the United States. Katy lives in the relative wilds of northern Fairfield County, Connecticut, where her writing room looks out at the woods, and her husband, two young children, two dogs, and one Blue Tonkinese kitten create just enough cheerful chaos to remind her that the very best love stories begin at home

REVIEW: Win Some, Lose Some by Shay Savage

For Matthew Rohan, every day is a struggle. Each task others complete without thinking is a challenge for him. Recently orphaned, he has to finish the last few months of high school and take care of his disabled sister on his own. When Mayra comes into his life, his comfortable routines implode.
Matthew can’t handle change, but Mayra is unrelenting in her quest to understand him, to show him acceptance and maybe even love. When she breaks through his shell, Matthew’s world will never be the same again. An awkward boy with Asperger’s Syndrome, a persistent girl who pulls him out of his isolated existence, and a lottery ticket that will change their lives forever.

Shay Savage blew my mind with this book!

This is not a book I am use to reading from Shay Savage and she totally floored me in a very good way!

This book is written in a male POV which I enjoy reading and it totally delivered.

I was captivated with Matthew Rohan!  He totally grabbed me, moved me, inspired me, gutted me, had me falling hard for him throughout the book.

Trust and acceptance are the key goals of this story.  Matthew learns that Mayra is a soul that he does not want to let go.

This book is one I will tell everyone to read.

It has a very powerful message that love no matter who you are, can be found as friendship first as it did for Matthew with Mayra, then become such a strong beautiful relationship that will last a life time.

Beautifully written story.  The words felt so raw, so real.

Shay Savage is an independent author from Cincinnati, Ohio, where she lives with her family and a variety of household pets. She is an accomplished public speaker and holds the rank of Distinguished Toastmaster from Toastmasters International. Her hobbies include off-roading in her big, yellow Jeep, science fiction in all forms, and soccer. Savage holds a degree in psychology, and she brings a lot of that knowledge into the characters within her stories.
From the author: “It’s my job to make you FEEL. That doesn’t always mean you’ll feel good, but I want my readers to be connected enough to my characters to care.”
Savage’s books many books span a wide variety of topics and sub-genres with deeply flawed characters. From cavemen to addicts to hitmen, you’ll find yourself falling for these seemingly irredeemable characters!