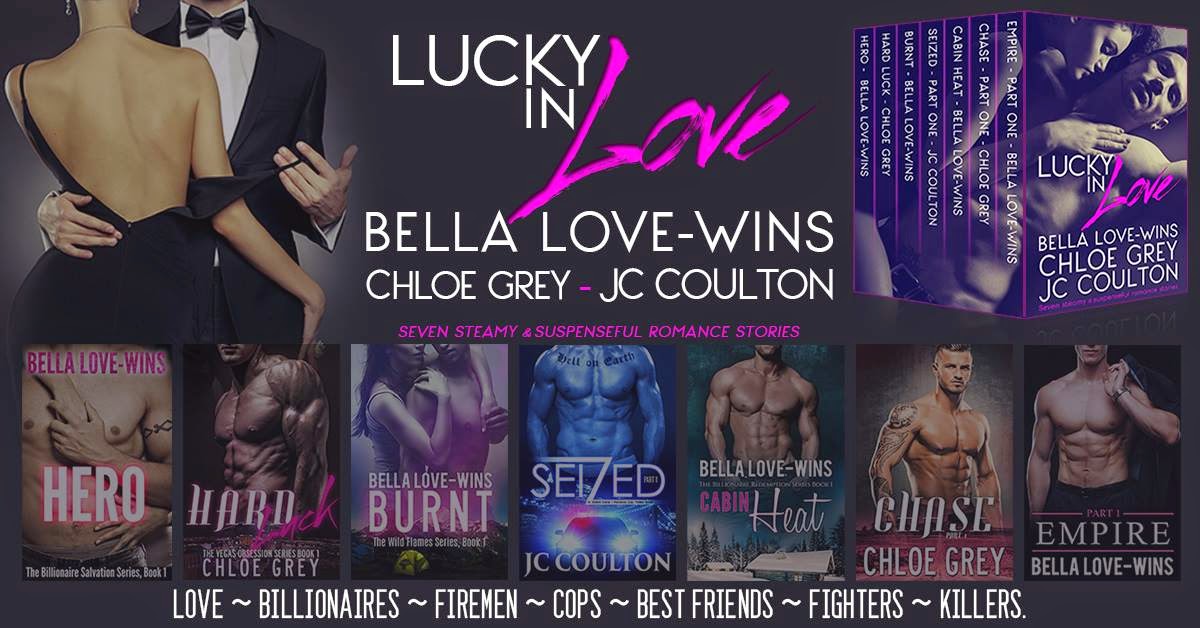 We are excited to reveal the cover for the upcoming Lucky in Love Anthology featuring Seven Steamy and Suspenceful Romance Stories from Bella Love-Wins, Chloe Grey and JC Coulton. Release Date: To stay up to date with news on the upcoming release make sure to subscribe at bellalovewins.com

Empire: A Romantic Suspense Novella Series
(Part 1 of the Empire Billionaire Stepbrother Romance Series)
Bella Love-Wins
Money. Sex. Murder. Can Jonathan take the heat for his billionaire father's crimes of passion? Or does his sexy lawyer Rebecca have what it takes to get him off? And will his stepsister Claire dig her claws into him like she's just confessed to him after dreaming of it for years?

Chase: A Romantic Suspense Novella Series
(Part 1 of the Chase Me Billionaire Romance Series)
Chloe Grey
Best friends. Hot Cars. Organized Crime. Will Chase and Meaghan be able to remain best friends after falling in love? Or has their race to independence thrown them into the wrong billionaire's den?

Cabin Heat: A New Adult and College Romance Series
(Part 1 of the Billionaire Romance Redemption Series)
Bella Love-Wins
The wrong turn through a Nevada mountain pass lands nursing student Abby Wittfield and her college friends in the middle of a blizzard that can end it all. When they're found by the handsome but reclusive young billionaire Dr. Andrew Carrington, it's a second chance at life. Will they save each other's hearts or is it too late for Andrew?

Seized: A Romantic Suspense Thriller
(Part 1 of the Seize Me Romance Series)
JC Coulton
To stay alive Carrie needs to learn to let go. Will she let police detective Blake take the reins as she lives through the biggest organized crime story of her journalist career?

Hard Luck: A New Adult Romance Novella Series
(Book 1 of the Vegas Billionaire Obsession Series)
Chloe Grey
Leslie Adam's numbers are up. Now she has to choose between love from Drew Masterson, a man who adores her, and more money she can ever spend in one lifetime.

Burnt: A New Adult Romantic Suspense Thriller Series
(Book 1 of the Wild Flames Series)
Bella Love-Wins
Love. Best friends. Murder. Will Kevin and Tara's friendship be enough to fan the flames of love? Or does someone have to die first?

HERO: A New Adult Romance Series
(Book 1 of the Billionaire Salvation Series)
Bella Love-Wins
She was hoping for a hero, but never realized who she would save. Kate Samuel thought she had left the life of a billionaire's daughter behind. When she saves a neighbor's young son during a fire, billionairefirefighter Lieutenant Matt Lewis makes it all the more confusing. Yeah…he was hotter than any man she imagined being with, but could he be just like the rest of the hero heart-breakers?

MEET THE AUTHORS
Bella Love-Wins - http://www.bellalovewins.com/ and https://www.facebook.com/BellaLoveWins
Bella is a fairly new writer. She enjoys new adult and contemporary romance based on her deepest fantasies.
She is twenty-three years old and works by day as a communications analyst in a small firm. She lives north of Toronto and dreams of moving to the small town of Grimsby, Ontario one day. She loves pets and cannot wait to have a Shih Tzu as a practice kid.

JC - www.jccoulton.com and https://www.facebook.com/JCCoulton
JC Coulton is a debut author with a passion for crime fiction and new adult romance. She wrote her first story when she was ten and never looked back. You can find her lounging in her local Chapters and sipping on Second Cup.

Chloe - www.chloegrey.com and https://www.facebook.com/ChloeGreyAuthor
Chloe Grey is a new adult and college romance fiction author with a passion for steamy billionaire romance stories. She volunteers at her local Rotary Club and enjoys any sport that involves men trained to run after balls.