COVER REVEAL:ONCE UPON A DUKE by Carina Rose

Release Date: May 20
“You’re a duke?”“Let me explain.”Living with a too-handsome-for-his-own-good roommate was trouble enough, but adding his royal title into the equation took it to an entirely different level.And why stop there?Toss in that Cameron Edward Alexander, Duke of Montclair, has just announced to an eager reporter that Janine Hughes was his fiancée. Granted, he’d said it in an accent that dreams were made from, but still...Engaged? To a duke? No way.Janine didn’t know if she should bow, curtsy, or call him Your Grace.This wasn’t in her plans. Janine wasn’t ready to be engaged to any man, much less a royal—and one she barely knew. But after hours of Cameron’s pleading (and a bit of shameless groveling), she agreed to pose as his fiancée and go to Montclair so they could do damage control. Little did they know, the wedding plans had already begun.
Add to your Goodreads TBR List! 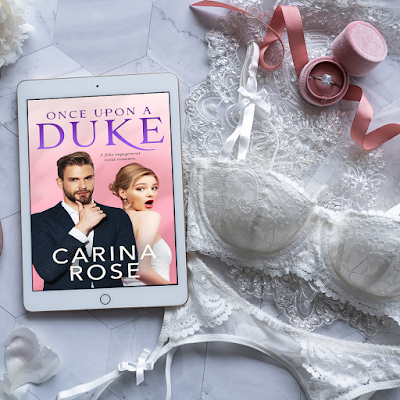 Carina loves everything about romance. To her, it’s the little things that matter.
She also believes in insta-love, since she knew her husband was the one the first day she met him.
When it comes to books, she uses them as an escape from reality. . . . to get swept away. Carina hopes her words do the same for her readers.
She’s a mother and wife and loves spending time with her family. She enjoys meeting new people, traveling, reading, watching sports, and, of course, relaxing on a beach.
Carina looks forward to sharing more love stories in her future novels.