Check out the sexy cover! 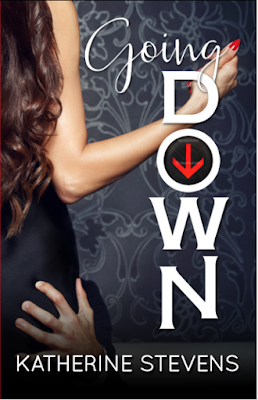 GOING DOWN by Katherine Stevens

Other Books by Katherine Stevens:
Felony Ever After: http://amzn.to/1ULdCxe

Summary of Going Down:
The plan for Cici Carrington was to steadily climb UP the corporate ladder, and hopefully do so without her skirt tucked into the back of her underpants. Unfortunately, there was no contingency plan for the aftermath of spending a night trapped in an elevator with a suit-wearing Elevator Sex God named Cole Danvers. A one…or two-time dalliance wouldn’t normally throw off the course of someone’s life…unless you find out you have to work together the next day.

To further complicate matters, Cici’s best friend is also her Human Resources Director. She has to hide her secret from every person she knows. Her only confidant is her one-eyed cat, and his loyalty is tenuous at best. Toss in an accidental mugging, a bungled disguise, secret meetings, and unintentional arson, and Cici’s beautiful, careful plan has fallen by the wayside.

Perhaps there aren’t any hard and fast rules in life. Sometimes you can have your cake and eat it too. Sometimes following the rules doesn’t get you ahead.

And perhaps sometimes you can get off between floors…