RELEASE DAY & REVIEW: Some Sort of Love by Melanie Harlow 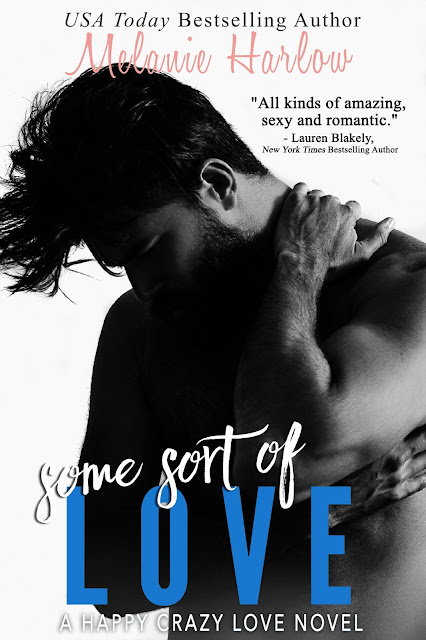 On the surface, I have it all—a career I adore, a loving family, the Nixon metabolism but not the Nixon ears, and a salary that supports my lavish taste in designer shoes, fine wine, and lacy lingerie…but I have no one to share it with.

Until the day I run into him—my one night stand from college with the cocky smile, let’s-get-out-of-here eyes, and dirty, dirty mouth.

Levi Brooks is six feet four inches of hot bearded fantasy. A sexy single dad with broad shoulders, strong hands, and a fantastically big…heart. (I mean, it’s massive. And generous. And it pumps so hard… um. Sorry. Lost my place.)

But he lives for his son, and he's keeping me at a distance because he thinks I deserve someone better—a man who can give me more time, more attention, more of himself. He doesn’t believe he could ever be enough. 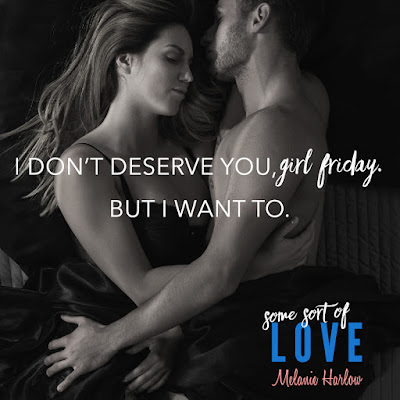 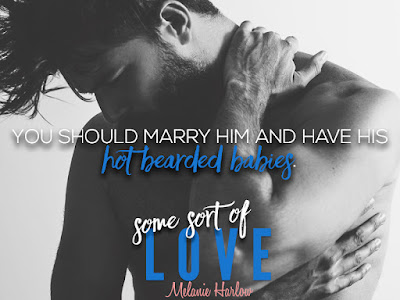 “So.” I glanced out the windows to the patio. “You want to go back out there?”

“You want to get out of here?”

I watched her rush up the stairs to get her things, and as soon as she was out of sight, I adjusted myself in my pants. My dick had jumped to life the second she said yeah, I do, as if the question had been you want to get naked and fuck? rather than something much less suggestive. Not that I didn’t want to get naked and fuck—hopefully I’d last a little longer than I had in the broom closet eleven years ago—but I didn’t want to make her feel like that’s what I expected. She wasn’t a horny nineteen-year-old college student anymore; she was a doctor, for fuck’s sake. She was beautiful and smart and mature and sophisticated, and a woman like her did not want some Neanderthal who probably needed a haircut and a new pair of shoes to throw her up against a wall for a five-minute fuck.

Fuck. I could be that guy.

As soon as I had the thought, I felt guilty. Scotty was the love of my life and always would be, and whenever I felt the slightest bit resentful about something I couldn’t do because of him, that resentment was immediately crushed by shame. He didn’t ask to be born wired differently, into a terrible relationship, to a mother who would decide she couldn’t handle being a parent, to a father who wasn’t prepared for any of it. He was completely innocent, and he needed me to be a better man.

Running a hand through my hair, I exhaled and wondered if I should ask Jillian for a raincheck on a night when Scotty’s usual sitter could be there. If he woke up again and I wasn’t home yet, he might never get back to sleep. We’d be up all night, tomorrow would be miserable, and the whole start to the week would be off.

But she was so beautiful. And I hadn’t been this attracted to someone in so long.

“Fuck,” I muttered, checking my watch. What was the right thing to do? If she were a different sort of woman, if her brother-in-law weren’t my friend and client, if we lived three states apart…if any number of circumstances were changed, I’d grab her hand, drag her out to my car, and spend the next thirty minutes fucking her brains out in the back seat. It would feel so good to take control that way, to lose control that way, to release some of this fucking tension. But was that fair to her?

My phone buzzed in my pocket.

“He’s up again.” Monica’s voice was strained, and in the background I heard the familiar keening of a nighttime meltdown. My chest hurt, the way it always did when Scotty was upset.

“Tell him he can play on his iPad.”

“That’ll just rile him up more. He’s tired. He needs to go to sleep.”

I clenched my fist. “Just do it, OK? It will help calm him until I get there.”

“Hey,” she said, her face concerned as she reached the ground and saw my expression. She set down the suitcase. “What’s up?”

Sighing, I put my phone back in my pocket. “I have to get home. Scotty woke up and he’s upset.”

“Oh.” She tried to hide it, but I saw the disappointment in her eyes.

“Of course.” She smiled, and her lips looked so soft and inviting, I took a step closer.

If you kiss her, it will be that much harder to leave.

I knew it was the truth, but I couldn’t help myself. One kiss. Just one. And then I’ll go. I moved even closer and took her head in my hands.

The curve of her smile deepened. “What are you doing?”

“I’m thinking about kissing you.”

I lowered my lips to hers and let them rest there, fully intending the kiss to be short and sweet, just a goodnight.

But I couldn’t break it off. I wanted more—I wanted to taste her. Slanting my head, I changed the angle of the kiss, teasing her mouth open with mine, slipping my tongue between her lips. A little sigh escaped her, and my dick jumped to life again.

But her hands were moving up my chest and my fingers were sliding into her soft brown hair and I could smell something sweet and citrusy on her skin and it mingled with the taste of whiskey on my tongue and oh God, I wanted my tongue everywhere on her body. I wanted make her come with it just so I could hear that little sigh again and again and again. And I wanted to feel my hands in her hair just like this while she got on her knees and took my cock between her lips, looking up at me with those big blue eyes…

Groaning, I forced myself to take my lips off her before I completely lost my senses. “God, I wish I could stay,” I said, resting my forehead against hers. “I wish a lot of things.”

“I know.” She played with my tie again. “I wish I was taking this tie off you, not straightening it.”

“What a coincidence, that’s one of my wishes too.”

She laughed and kissed me quickly. “Another time, maybe. You better go.”

Well this book just gutted me!  I loved it!

I feel instantly for Levi.  He is such a broken soul of a man who always puts everyone around him first.  His son Scotty, his family and he doesn't know how to try to put himself first without feeling totally guilty.

We all can relate to that.  It's hard to not feel selfish for wanting to do something that feels right at the moment it happens.

And that is what happens to Levj when he meets Jillian again after many years.  They are instantly attracted to one another again.

It gets hot & heavy instantly,  Levi is a caveman when it comes to being behind closed doors with Jillian.

Jillian has not found a man worth being her equal and when she is reunited with Levi, she realizes that he is the one that she has been waiting for.

I loved how we get a POV from both characters.  Levi's feelings totally made me cry& fall  in love with him.  He is such a sweetheart.  a manly sweetheart!  And yes having that beard totally was a bonus ( the cover was an awesome visual for my Levi!)

Oh Jillian...My heart swelled for her too!  She just is such a good person.  I give her tons of credit for what she did and how she reacted to Her relationship to Levi!

Yep Jillian is an Ellie to Levi's Carl!

Go 1 click this and find out whether Levi can learn to put himself 1st and include Jillian with him! 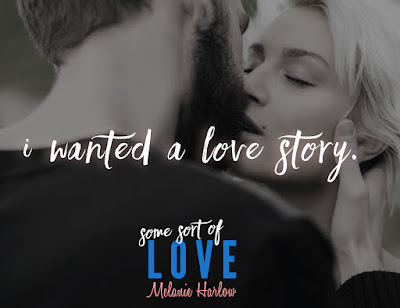 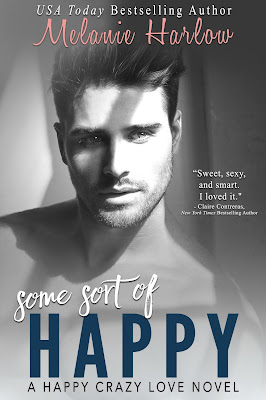 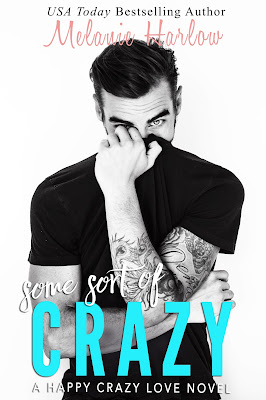 Melanie Harlow likes her martinis dry, her heels high, and her history with the naughty bits left in. When she's not writing or reading, she gets her kicks from TV series like VEEP, Game of Thrones, House of Cards, and Homeland. She occasionally runs three miles, but only so she can have more gin and steak.

Melanie is the author of the HAPPY CRAZY LOVE series, the FRENCHED series, and the sexy historical SPEAK EASY duet, set in the 1920s. She lifts her glass to romance readers and writers from her home near Detroit, MI, where she lives with her husband, two daughters, and pet rabbit. 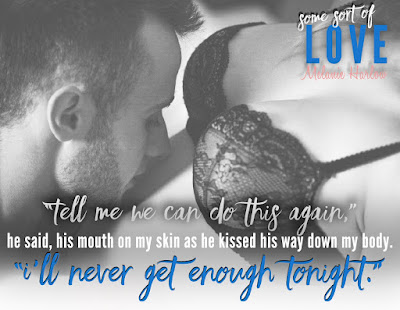