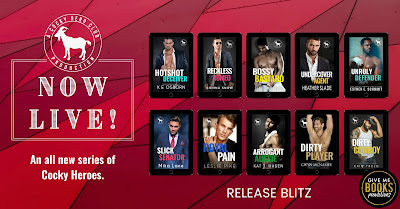 Gabriella
It was supposed to be simple—drink tequila, forget about the life I’m running away from and have one wild night. That’s exactly what my next-door neighbor, Aubrey, told me to do.
That’s when I met him—the arrogant Aussie.
It’s easy to forget a night with a stranger until that stranger is living next door.
Oliver
If it wasn’t for my horrific motorbike accident, I’d still be playing soccer. Instead, I’m crashing at my mate Chance’s place with no clue where my life is heading.
I needed an escape while I got my head together.
But it was never supposed to be with her—the girl next door. The rich heiress arranged to be married to some wealthy snob, and I was the arrogant Aussie who didn’t care about anyone but myself.
She couldn’t have been more wrong.
Gabriella Carmichael is a heartbreaker—the worst kind.
And I’m selfish, cocky, and won’t settle for second best.
I have to make her all mine.
There is no other choice.
ADD TO GOODREADS

Loved it!
This is an awesome story added to the Cocky Hero Club world.
Oliver & Gabriella are a fun story to read.
I love me some hot soccer players going after more than just the goal... the girl!
Author Kat. T. Masen story gives a good amount of romance, heartache, humor and angst to keep you well entertained.
Go get this book get connected to the Arrogant Aussie who will steal your heart.
Go One Click it!
**ARC kindly provided in exchange for an honest review***
5 Cherries Popped

And check out these other books in the Cocky Hero Club Series!

I was at the top of my game. I knew who I was and what direction my life was headed. I owned the most prestigious night clubs down the east coast yet I kept my identity a secret. I don’t like being in the lime light and my hometown was none of anyone’s business. However, making people happy was. I did that with my clubs. Until the day tragedy struck my family. I had a choice to make and it wasn’t an easy one.

At the end of the day, family always comes first. I went home to take care of my mom and the ranch. I didn’t plan on that little smart mouth Cassidy Birch showing up with a laptop in hand. Just out of a cheating relationship the girl was hell bent on hating all men. Me included. Hating me wasn’t the only thing she came back home for. She needed a quiet place to write her next article. Her interest? The man that suddenly closed down all the upscale clubs on the east coast.

I wanted to be anonymous for a reason. I didn’t want the cameras and all the tabloids in mine or my family’s business. So, I don’t give her anything. Well, nothing she wants anyhow.

I give her the cowboy, the man that I’ve once again become with the dirty mouth. Until she learns the truth and wants to run with it. I should have known that a second chance at love wouldn’t happen for me. All fairy tales have to end, right?

A vow of justice.
A breach of silence.
A heart fueled by vengeance.
It all consumes the life of one Unruly Defender.

The first thing Eddie swore when he walked out of prison was that justice would prevail. He didn’t throw the first punch that landed him in prison, but he will make sure this time, he will be the last one to strike.

The twists and turns of Gracelynn’s life ended when she found new friends along with the perfect job. That is until the owner shows up and tips the balance of her life in a frustrating, and eventually dangerous way.

With every heartbeat Eddie gets closer to unraveling a secret that took lives, and in the end will risk the woman who touched his heart. Life is full of surprises and unknowingly crossed paths, but emotions and vengeance are bound to collide into a deadly explosion. Will Eddie be the one coming out on the losing side again or is he willing to give up the one thing he wants more than his next breath? Vengeance or love? Justice or death? In the end, the choice might not be his.

Only one word can describe Sebastian “Bash” Fury…
DIRTY.
He’s dirty hot.
A dirty talker.
And a dirty player.
On the ice, he truly earns his nickname.
He bashes opponents without regard for the rules or safety.
Which is precisely why I can’t have him on my team.
As the first female head coach in the NHL, all eyes are on me, waiting for me to fail.
A man like Bash Fury is a liability who could ruin my career.
Even worse, he’ll destroy my willpower.
I should despise that cocky bastard.
But something about his swagger and quick smile make him irresistibly charming.
Despite my best efforts, things are heating up and the ice around my heart is starting to melt…
All because of this dirty player.

Resisting a cocky undercover agent is her mission impossible…

Lynx
It was one night,
A night of pure passion and desire,
A night I will never forget.
But she walked out,
And I never stopped thinking about her.

And now, she's back
Within reach.
And again, she’s off-limits,
Belongs to someone else,
One of my men.
Teaming up with her to take down

Those who threaten our freedoms
Seems like a perfect way to get close to her,
But there’s more at stake than ever before.

Emerson
I never forgot him.
He was—is—everything.
But the timing was off;
I had more happening in my life than I could handle.

And now, with him right there,
I can feel how much I’ve missed:
His touch, his scent, his taste.

Except, there's more on the line
Than a love affair.
We have to keep it professional.
But can I do that when
I need so much more from this undercover agent?

ASHTON BARCLAY, or as I like to call him, Mr. B. for Bossy, is fast becoming the bane of my existence.

After running into him, literally, he’s now popping up everywhere, and somehow managing to weave his way into my life.

He’s egotistical, smug, and so ridiculously good-looking it should be illegal—he’s way too hot to handle. I don’t do hot, those type of guys are more trouble than they’re worth. Although, I’d secretly love to do him.

We’ve kissed once—it was smokin’, and led to me dry humping his leg in front of the entire club like a shameless hussy. Oh, and did I mention I deep throated his thumb within seconds of meeting him, and I didn’t even know his name. Apparently, I have issues. Big ones.

He makes me do things I never imagined myself doing.

He makes me feel things I’m not comfortable feeling.

It just wouldn’t work, even if I wanted it to. Between us, we have more baggage than a carousel at LAX airport.

He’s everything I want, but can never have.

Or so I thought.

We all have secrets.

Like the fact that I portray myself as a simple florist, living a mundane life.
Which is a far stretch from reality.

My family is rock god royalty. My father an ‘80s icon, my siblings all celebrities in their own right. Then there’s me, Lyric Griffin, hiding in plain sight trying to be everything I’m not.

Along comes Eddie, someone I find myself completely attracted to. I’m simply Lyric to him, not a princess of rock. He’s gorgeous, a little cocky, and knows what he wants — me.

But I made a mistake.
I trusted him, and he betrayed me.
Is Eddie nothing but a hotshot deceiver?

The thing about secrets, they always have a way of coming out in the end.

The only thing harder than being a royal? Falling in love with one.

Belinda
As a political blogger living in Manhattan, I have no time to date. My few free hours are spent with best friend Soraya, and her husband Graham. Love has no place in this equation.
Then Prince Zan walks into the coffee shop. He’s confident and different from other men, making it clear from our first conversation royal lineage won’t stand in his way.
I know better than to be carried away by green eyes and soft lips.
But if that’s the case, how did I end up in his bed?

Zan
My dark past is a nightmare I can’t escape from. It was anything but easy to become a royal.
Then I met Belinda. She might be a commoner, but there’s nothing at all common about this woman. One look is all it takes. Maybe if I bring her to my homeland she’ll be under its spell too.
But the differences between our two worlds seem impossible to overcome. I refuse to ignore my duty and passion for my people, and Belinda won’t abandon her career.
The right woman or destiny? Whatever it takes, I'm determined to have both.

Royal Pain is another steamy edition to the Cocky Hero Club series by author Leslie Pike. Opposites attract in this royal romance of choosing between love and duty. Follow your heart by devouring this passionate love story today!

When my college crush, Talbot Richardson—who didn’t even know I existed—was elected to the United States Senate, I bragged a little too loudly that I knew him.
Oops.
Did I really know the sexiest, slickest guy on campus?
Not a chance in hell.
Unless knowing someone is following them around campus to see which dorm they live in, and which class they have at eight a.m. on Wednesdays.
Oh, and I might have stalked him in the dining hall, too. Turned out he ate a lot of grilled cheese.
And thanks to my big mouth, the paper I work for now expects me to do a story on him because he’s not granting interviews. Not even to Anderson Cooper.
But surely he’ll meet me since we went to college together? Right?
Logical assumption. Except that he doesn’t know me from a hole in the wall.
But I wasn’t about to blow my chance with the paper. Writing obituaries for three years at one of the country’s top newspapers was not my idea of a fulfilling career, especially since the money I’d borrowed for my Ivy League education could buy a small country. I wanted more—I wanted to report on real news. I wanted to prove myself, and even work in the face of danger. A girl’s got to have dreams.
All I needed was a break.
No question, I was getting an interview with Talbot Richardson if it was the last thing I did. If I had to beg, borrow, steal, or… even take my panties off.

She'd always been off-limits... And I'd never wanted her more.

Gorgeous, loyal, poised, and all grown up.
Riya Guiliani had been a thorn in my side since we were kids, it seemed not much had changed.
Except for the fact, she was known in influential circles as "the fixer," and she was back in NYC to clean up a mess.
Mine.
Who cared that I was a little reckless?
I hadn't turned my father's million-dollar company into a billion-dollar empire by doing what was expected of me.
But sometimes the unexpected was exactly what we needed.
And I needed her in a way I never saw coming...