EARLY REVIEW: Twice in a Blue Moon by Christina Lauren

Twice in a Blue Moon

PURCHASE HERE FROM ALL RETAILERS:

Sam Brandis was Tate Jones’s first: Her first love. Her first everything. Including her first heartbreak.


During a whirlwind two-week vacation abroad, Sam and Tate fell for each other in only the way that first loves do: sharing all of their hopes, dreams, and deepest secrets along the way. Sam was the first, and only, person that Tate—the long-lost daughter of one of the world’s biggest film stars—ever revealed her identity to. So when it becomes clear her trust was misplaced, her world shattered for good.
Fourteen years later, Tate, now an up-and-coming actress, only thinks about her first love every once in a blue moon. When she steps onto the set of her first big break, he’s the last person she expects to see. Yet here Sam is, the same charming, confident man she knew, but even more alluring than she remembered. Forced to confront the man who betrayed her, Tate must ask herself if it’s possible to do the wrong thing for the right reason…whether “once in a lifetime” can come around twice.

I am a sucker for Second Chance romances & Author Christina Lauren delivered it.

I liked the unusual story of Sam & Tate.
There is a good combination of love, heartache, sexy times and a very good mystery of why these two did not work out the first time.

This book brought me back to my days living in Hollywood and the people that I was surround by like Tate.  It is a world that was brought to life in this story and made it feel so real to be in Tate and Sam's world. Many emotions flowed reading this book.

Sam was frustrating to like in the beginning but he grew into me and I totally understood why he was soo guarded just like Tate was with their feelings towards one another.

Tons of angst so be warned that you will want to smack these two around and yell at your book in frustration but when that frustration is finally popped, be ready to explode in excitement with Tate and Sam getting that second chance in love,

Very well developed plot and storyline.  Many of the background characters I want to know more about and hope to see in future books of their stories. 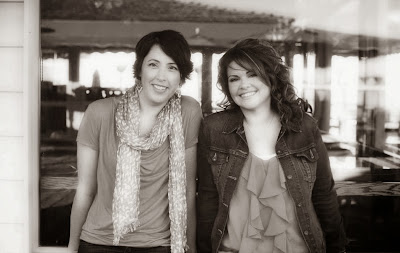 Lauren Billings (but everyone calls her Lo) has a Ph.D. in neuroscience and before she made writing her full-time job, would spend her days doing nerdy research-type things wearing a lab coat and goggles. She is silly Mommy to two littles, wife to one mountain biking homebrewing scientist, bestie to a shoe-stealer, and an unabashed lover of YA and romance.

Christina Hobbs (but you’ll always hear Lo call her PQ) used to spend her days in a junior high counseling office surrounded by teenagers. Married to the cutest boy in school, she has a thirteen year old daughter, is an unapologetic lover of boy bands and glitter, and also likes to steal Lo’s shoes.

@lolashoes (Lauren) & @seeCwrite (Christina) on Twitter.
On Tumblr! where we post kissing gifs and writerly stuff and Wattpad for short stories and sneak peeks!