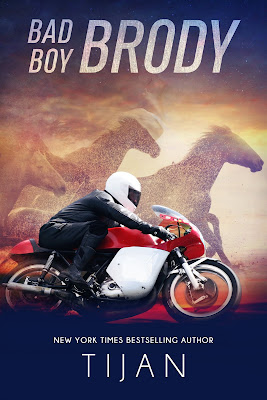 Be ready to take off & run away with Brody!

This story is told in multiple POV's which I am a big fan of because Ilove to know what is going on in the minds of each character.

Just a spectacularly, vivid, suspenseful story of two broken souls that come together to find each other when they least expect to.

I loved how we get a good dose of the Hollywood life from Brody and Morgan brought the right amount of free willing life of living out in her small town.

Morgan instantly was a character that I could connect with being an outsider to everyone around her.  She is broken and wounded.

Brody coming into her territory makes Morgan realize she is not the only one that suspects that there is more to her mothers death than everyone else thinks.

Brody & Morgan's chemistry is a beautiful buildup full of angst, heartache and soo much more.

Go get this book and find out if Bad Boy Brody is really as bad as everyone thinks.

Tijan is a New York Times Bestselling author that writes suspenseful and unpredictable novels. Her characters are strong, intense, and gut-wrenchingly real with a little bit of sass on the side. Tijan began writing later in life and once she started, she was hooked. She’s written multi-bestsellers including the Carter Reed Series, the Fallen Crest Series, and the Broken and Screwed Series among others. She is currently writing a new YA series along with so many more from north Minnesota where she lives with a man she couldn’t be without and an English Cocker she adores.
Facebook
Twitter
Website
Posted by CherryRed's Reads at May 07, 2018
Email ThisBlogThis!Share to TwitterShare to FacebookShare to Pinterest
Labels: Reviews, Tijan