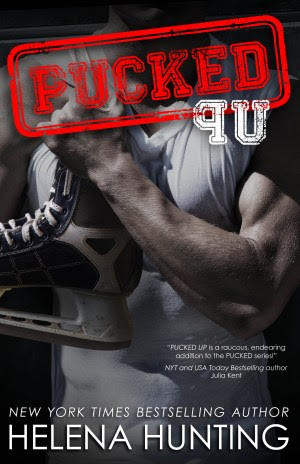 Miller “Buck” Butterson has been banging his way through life ever since a puck to the face fixed his messed up front teeth. After five years in the NHL, deflecting goals on the ice and scoring them with puck bunnies, Miller has decided he’s ready for a girlfriend. A real, non-bunny girlfriend to take on dates, and not jump into bed with after five seconds of conversation.
Miller thinks he’s found that woman in his teammate’s sister. Except, unlike team captain and all-around nice guy Alex Waters—who happens to date his stepsister, Miller’s media reputation as a manwhore is well earned. Beyond that minor detail, Miller doesn’t know the first thing about relationships or the time and effort they require.
Miller learns—eventually—that if he wants to make Sunshine “Sunny” Waters fall for him, he’s going to have to do a whole lot more than show her his stick skills in the bedroom. 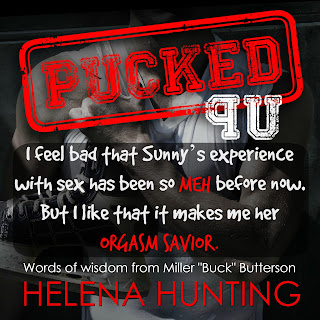 If i thought I was in love with Alex Waters from Pucked, well Buck totally had me in this book!

Yes he is a funny hot Hockey player who doesn't know when to keep his pants on but when he meets Summer, he learns that he is tired of the disposable woman who are not giving him what he wants....Love!

I was laughing so hard at all the funny lines that Buck throws out.  Helena Hunting knows how to write funny.

Buck & Sunny are not a likely pair to be together but like they say, opposites attract.  While reading, I wanted to smack Sunny upside the head with a hockey stick for making Buck frustrated as well as myself.  Some of her decisions she made I had questioned but it made sense.

Sexy scenes that will melt the ice rink, sayings that will be stuck in your head forever, and unforgettable characters that you won't forget.  This book has it all.

This book scored!  I Loved it! Can't wait to see what happens next in this series By Helena.

Go get Pucked Up!