Cole Masten. Abandoned by his superstar wife, Hollywood’s Perfect Husband is now Hollywood’s Sexiest Bachelor: partying hard and screwing even harder. Watch out Los Angeles, there's a new bad boy in town. Summer Jenkins. That’s me, a small town girl stuck in Quincy, Georgia. I cook some mean chicken and dumplins, can bluff a grown man out of his savings in poker, and was voted Most Friendly my senior year. We were from different worlds. Our lives shouldn’t have collided. But then Cole Masten read a book about my small town. And six months later, his jet landed on our dusty airstrip, and he brought Hollywood with him. From the start, I knew he was trouble. For our town. And for me. Sometimes, opposites just aren’t meant to attract..

EXCERPT: When the door to the production trailer burst open, it brought with it a wave of heat and beauty. Cole looked up from the storyboards and locked eyes with Summer, who blew across the room at him like a tornado on tilt. “There’s no love story between Ida and Royce.” Summer snapped, throwing down the script, pages fluttering down between them. In the small trailer, conversations stalled and he could feel the attention turn their way. “I’ve read the book. Three times!” It was good to know that someone had read the damn book. Cole glanced down at her temper tantrum of a mess and back up, raising his eyebrows mildly. “It’s a movie,” he said, turning back to the storyboards. “The writers are adding some excitement. It’s normal. You’d know that if you were in this business.” The dig was unnecessary but he couldn’t help it. This woman turned him into the devil. “I read the first script. The one you sent over with my contract. Ida and Royce hated each other. Why would Royce…” she snatched up a page from the ground and read out a line. “pushes Ida against the file cabinet and kisses her passionately.” She balled up the page and threw it down to the ground and he could see, in her eyes, the panic. Panic. An unexpected reaction. “We’ll use that,” Don made the dangerous move of stepping in, putting a soft hand on her shoulder. “You don’t understand. The passion from their hatred will make it hotter.” “No.” Summer said, her face hard, her eyes on Cole. “It doesn’t make it hotter. It makes it stupid.” “Aww… come on, Summer.” Cole chided, stepping closer, his hand reaching out to pull at her wrist. She fought him, yanking it back and the moment of their bodies meeting didn’t happen. He leaned down and whispered, right against her ear, the smell of her apple-scented lotion enough to make him want to empty out the production trailer right that moment. “Sure it does.” She jerked back and twisted away. “If he kisses me on camera I’m going to lose it.” She shot at Don, pointing an accusatory finger in Cole’s direction. “I know you will,” Cole laughed, crossing his arms to fight from reaching out. “You’ll fall apart under my mouth, baby.” Summer screamed in response, her hands thrown up in frustration, and spun to leave, her script left behind, the slam of the exit door loud in the full production trailer. “That went well,” Cole mused. He linked his hands and rested them on his head, rolling his shoulders back. Panic. She’d had panic in her eyes. Fuck. “What do you expect?” Don said. “You threw this on her without warning. I told you we should have met with her this morning, gone over the changes to prepare her. But no – you just wanted to dump it on her via call sheets and sides.” “Dump it on her? I was People’s Sexiest Man last year. She’s not mentally adjusting to a war camp for God’s sake. How hard is it to kiss me?” “It’s actually three kisses,” a dark-haired PA to his left pointed out. “And a grope.” He gave her a hard look and she withered a little. “I’ll go talk to her,” Don said. “Eileen, you shoot #4 and I’ll talk to Summer. I want to try to get #14 shot at eleven so let’s get our asses in gear and get this done.” “I’ll talk to her.” Cole stepped in. “You shoot #4 and I’ll talk to her.” “No,” Don snapped. “With my luck you two would make up and any authenticity to the scene would disappear. Just stay away from her and be ready at eleven.” Cole chewed on his cheek, then nodded. “Fine.” Don was right. He should stay away from her. Far. Far away.

And I totally loved this book that I read it 2x within a 48 hr period because I just could not let go of Cole! 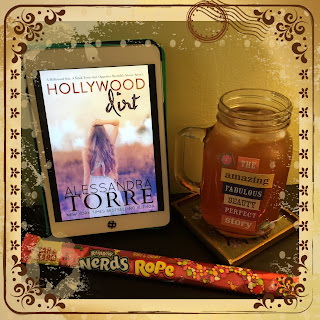 I now understand everyone being in love with Cole Masten.  As soon as I began this book, I was fangirling for him just like the rest of Hollywood.

This book has so many good twists and surprises that I was squealing while reading this at work! (sssshhh, the systems were down so I had to be productive at work some way right?)

back to my man Cole!  Yes he is totally mine.  Claiming him...okay well maybe Summer is claiming him but you will have to read the story to find out if she does or not.  Believe me you will want to read this book by Alessandra Torre.

Okay I usually don't put pics in my reviews of who I pictured as the main characters because I save that for myself but I have to put it up in this review because the whole time reading this story, it is who I pictured & I want to share :)

Blake Lively is who I pictured as Summer Jenkins.  She is a beautiful Blonde who I have a girl crush on and I can totally picture her playing this part.  She has all the characteristics that Summer has; smart, funny, sexy, just has a way to look always flawless no matter what she wears.

Summer:  Loved how she is a smart sassy southern gal who doesn't take anyone's shit.  She is a strong woman who when she meets Cole, she resists him when in his presences around others, but when she is alone with herself or with him...well she totally can't resist him.  I'm with Summer, I would not be able to keep my thoughts out of the gutter either when you have Cole Masten int he flesh right in front of you giving you attention you never thought you would have or want.

Cole:  Oh boy!  Um...yeah this is who I totally pictured as him.  Sexy, Hollywood A+ actor who is devoted to his acting and not use to be told no.
Yep since Cole likes to workout & is always caught wearing workout gear without a shirt on or in his boxer briefs...I pictured Nick Bateman as him right away. y'all I was crowing like a "Rooster" or was it like a "Chicken" when Cole starts to realize he sees something in Summer that no one else can see?

As always, the sex in this book is off the charts hot!!  You have to read to find out how hot it is & you don't want to miss out reading it.

Cole & Summer are like soo hot together that an egg can fry on the sidewalk in minutes.

This story brought back some memories for me living in Hollywood and being around the crowds, the people, the life of being in the industry.  Alessandra captured it very well in this book.  This book had tons of fun characters, well put plot and I LOVED all the little surprises that I was never expecting to happen, happened in this book!

Go get this book!

Want to read the first pages of Hollywood Dirt?

Alessandra Torre is an award-winning New York Times bestselling author of ten novels. Her books focus on romance and suspense, all with a strong undercurrent of sexuality. Torre has been featured in such publications as Elle and Elle UK, co-hosted Dirty Sexy Funny with Jenny McCarthy, as well as guest blogged for the Huffington Post and RT Book Reviews. She is also the Bedroom Blogger for Cosmopolitan.com.
You can learn more about Alessandra on her website at www.alessandratorre.com, or you can find her on Twitter (@ReadAlessandra) or Facebook.