REVIEW: A Pound of Flesh by Sophie Jackson 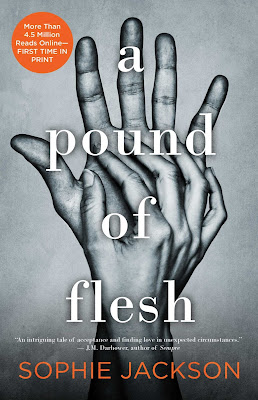 Haunted by nightmares of her father’s street murder fifteen years ago, Kat Lane decides to face her fears and uphold his legacy of helping others by teaching inmates at a New York prison. There she meets arrogant Wesley Carter, who’s as handsome as he is dangerous, as mysterious as he is quick-witted, and with a reputation that ensures people will keep their distance.
As teacher and student, Kat and Carter are forced to leave their animosities at the door and learn that one should never judge a book by its cover. As Carter’s barriers begin to crumble, Kat realizes there’s much more to her angry student than she thought, leaving them to face a new, perilous obstacle: their undeniable attraction to one another.
When Carter is released and Kat continues to tutor him on the outside, the obstacles mount. Can they fight the odds to make their relationship work? Will Kat’s family and friends ever accept her being with someone of his background? And will Kat’s discovery of Carter’s role on the night her father died force them apart forever...or unite them?

I seriously read it in one sitting!  I could not put it down.  Yes it is that good!

This is Sophie Jackson's debut book which started out as a FanFiction story about Twilight.

Yep, you read right, another AMAZING author that has created a story that I fell in love with from our love of Twilight.  I love this fandom. It has seriously brought sooo many good people as friends and has created such talented authors.

Okay back to the review; This story is filled with strength, forbidden love, heart ache, forgiveness, new beginnings, tortured pasts, steamy sex... it has it all.

The fabulous Kat Lane is a woman who takes no bullshit.  And especially not from hot bad boy prisoner Wes Carter.  Sophie Jackson writes their story with depth that captured my heart & soul.  I felt so hard for these 2 characters.  Their story emotionally got to me hard.  I cried, I laughed at Carter's smart mouth, I loved how Kat gave it back to him! I liked how we got a very descriptive background of how Kat and Carter became who they are with themselves and each other.  When they get together, it's CHERRY RED hot!!!

My cherries went on overload!

Like I seriously needed to take a break from reading to cool down but of course, I love to torture myself and let myself just sit my own puddle of cherry mush and enjoyed this story.

I don't want to give away anything in my review so I will just say, GO READ THIS BOOK!!

I am addicted to everything Carter!

I'll shank you for him because he is now my new TOP book boyfriend!